Today was a very unusual day.

It was sunny! And warm enough to be out in the garden! We were trying to work out how often that had happened this summer – and decided no more than half a dozen times.
And the Met Office has issued a severe weather warning for the South tomorrow – very heavy rain and possibly thunder.

Now some people may think that a sunny Saturday means gardening – or sport [shudder]. But of course it really means sitting in a comfortable c 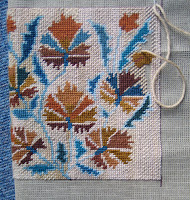 hair outside with some hand embroidery.
Unfortunately this is on hold till I can get some more cream wool – annoying as one reason I started it was to try to reduce the stash. However it has rekindled my interest in needlepoint. I used to do quite a lot BC&G [before C&G], although using kits – or other people’s patterns – Shock! Horror! I am thinking of a cushion, also based on Uzbek designs, but in inauthentic blue to go with the sofa - and to use up some more stash. 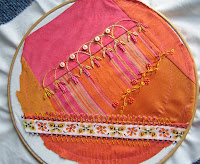 Instead I worked on this, which I had started during an insomniac morning when nothing else appealed.

Although it may be hard to believe it will eventually become a pincushion and was inspired by this:

While you’re there have a look around – Lisa does some wonderful stuff. I want to embroider like her when I grow up – although my stuff would probably be a bit louder.

I enjoy doing crazy quilting - I find it gives semi-instant gratification [provided you haven’t decided to make a quilt!] and once you have made your block, design becomes a series of choices about seam treatments. I am useless at inventing stitch combinations so I Googled around to seek inspiration. Lisa’s are beautiful – but why do so many crazy quilts look like a dogs dinner?

You may think that someone who puts her name, in naff plastic beads, on her work may be living in a glass house and shouldn’t throw stones – and you may be right – but just because the Victorians used every colour in the rainbow – do we have to? The Victorians were not, on the whole, noted for their taste. Not until William Morris. And the Victorian quilts I have seem seem to use a lot of dark/saturated plain colours - not everything in the scrap bag.

And I can justify the beads – I felt the block needed some more white to balance the lace. Mind you, I am not altogether happy about the lace – but I like the border on it so it is staying!

And finally – to return to my experiments with sewing with plastic magazine wrapping. Should anyone be mad enough to want to do the same - I have experimented with every sample that has come into the house since – and none of them have worked. The only one that came close was the wrapping from ‘The Psychologist’ – which I realise is not widely available. Unfortunately I cannot remember the source of the successful sample although it might have been ‘Cloth, Paper, Scissors’. I will keep testing and let you know if I find anything which works.
Posted by Cda00uk at 21:54