partly because I've had a couple of good nights sleep, partly because Mr Cheddar very kindly sent me some photos from Saturday [before he read my blog - he must be psychic], partly because he thinks it may be possible to retrieve mine from my camera - and partly because I made another book to cheer myself up.
I have had to scan it [because I can't use the camera until one or other of the IT experts in the family have had a look at it]. It is the latest example from Sue Bleiweiss's workshop. It was going to be lavender, because the pages are envelopes and I had some nice hand-made paper envelopes needing to be used up. [They were left over from this - which used the paper that went with them.]
However when I was fossicking around looking for something to decorate the cover with - an unfinished machine embroidery I had started in a workshop with Brenda Weekes fell into my hands and yelled 'Use me! Use me!' Of course I had to finish it first. Making this little piece of machine embroidery, about 12 x 17 cms, took hours and gave me even more respect for Alice Kettle whose pieces are much much much bigger. 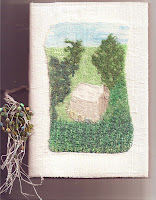 But the embroidery said it definitely didn't want to be on a lavender journal. It demanded white silk dupion, no less.
The journal demanded that, instead of the pages being sewn in in a restrained manner with internal knots, like Sue's, it had external knots. With long ends. And not just one thread per signature - three threads. And a few beads. [They are opalescent green, not the colour they appear in the scan.]
Those of you who read my discussion of minimalist embroidery the other day will be laughing your heads off. There is nothing minimalist about those beads.

Sue's lesson suggests making little pamphlets to put in the envelopes. I made a variety of folded, single sheet books, with hand made paper covers glued on.

The embroidery was inspired by a picture of a cottage - our dream cottage in Wales. The dream has been postponed until the housing market settles down a bit - so the book will be used to store ideas, plans etc. until we can make the dream a reality.

On a more mundane topic - thank you to the people who responded to my banking rant - you must have read it all the way to the end! There have been some strong recommendations for First Direct - so I think my account may be on the move soon.
Posted by Cda00uk at 18:02