No, not what you think. I’ve been skirting round that acronym since Wednesday, but I’ve decided I can’t go on typing ‘personally managed sketchbook’ all the time.

After my litter photography, I spent last night playing around with PostworkShop and my litter images. I was going to include some flower photos I took too, but I found the 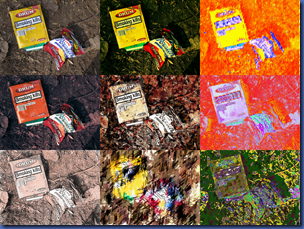 litter ones much more fun.

As you can see.

I did print various images off on collaged paper and Lutradur, which I was going to scan to show you – but – er – I’m not quite sure where I’ve put them. [CRS, you know – Can’t Remember S**t.]

Today, armed with a pot of white emulsion. I attacked some of my ‘artwo 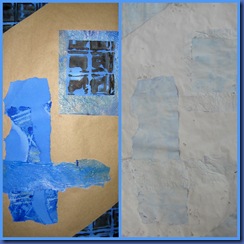 Before and after.  I’m not sure what to do with it next, but smearing, rubbing, tearing and possibly sanding may come into it. [Can you tell I hate it, even now?] 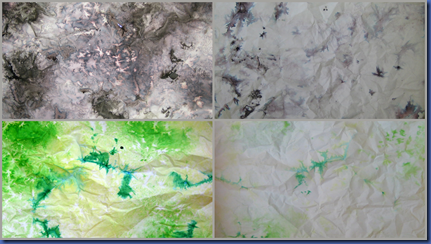 But these, I like – inspired by the instructions here. I love those pinky bits which appeared in the black one, and the fact that  the fronts and backs are so different – good if you want to make books.

And finally – I made a book, from the instructions here. After all, if [and it’s a big if] I am researching artists’ books for my RP, it’s OK to make book samples for the PMS, isn’t it? 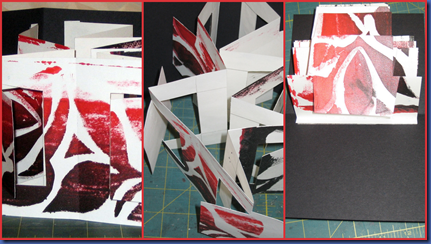 It is an interesting structure – like a flutter book with attitude. I used a failed screen print, and realised too late the crucial importance of folding it very very accurately. But, hey, it’s only a sample! I like the flappy bits, which, I think, don’t have to be precisely that shape – and I like the way the flaps in the example on Jane’s blog contrast with the background. Definitely something to return to.

I thought when I started typing this I hadn’t done much today [usual post-insomnia lethargy - PIL?] – but that’s not too bad a list.

Tonight, of course, is Danish Detective Drama [DDD] night – but the last one! Tonight we find out who done it! What we won’t find out is how we will survive Saturday nights until the BBC [enough with the acronyms!] runs the next series next autumn – though rumour has it we are getting another series of the almost equally good Spiral to keep us going.

Will I have any fingernails left?