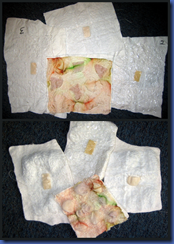 No, they are not fried eggs – although if i wanted to embroider a fried egg I think I’ve discovered how to do so.

The top group are my experiments in quilting plastic [and a bit of painted silk which appeared from somewhere] onto felt.

The bottom group are the same pieces after they’d been through the washing machine.

Unfortunately they are not in quite the same positions – one difference you may have noticed is that the numbers washed off.

As numbered in the top photo they are:

and the silk, which I thought it was polyester until I  tried a heat gun on it and it didn’t melt, just burned. No photos of the heat-gunned pieces as the differences were surprisingly small – mostly just holes in the yolks [a bit of acrylic felt as a resist under the plastic.] 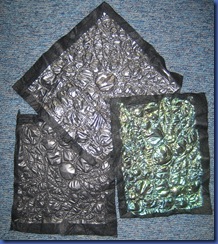 I liked them so much I made a few more – shrink wrap, black bin liner and iridescent film from Crafty Notions. I think it’s shrinking felt as opposed to acrylic felt – we will find out tomorrow. 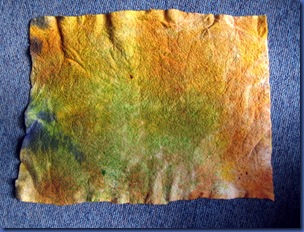 And in my pursuit of something suitably disgusting to make bag contents, I took a piece of not very nice dyed felt and made it even worse with spray paints – although it has just dawned on me that the paint may wash out when I try to felt it further. :>( 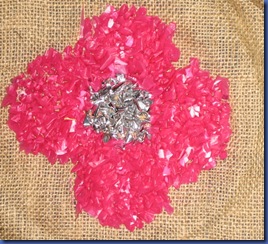 And on top of all that, I finished Daisy, who was waiting  until I could replenish my supply of Superdrug bags.

As someone who has carried recyclable shopping bags for years, I am finding it very hard to accept a plastic one if it is offered – but as this small piece took 1.5 bags, I will need to get into the habit of collecting them!

Unfortunately the daily drawing has slipped in this welter of machine embroidery [which, long term readers may recall, I don’t do] but I hope to get back to it tomorrow.