Is photography taking over my life?

Maybe - I have been posting much more regularly on Cheese Snaps than here. That's because it's easier to take a photo, app it a bit and stick it on the blog, than to think of something vaguely interesting to say. Like this photo, taken last Tuesday at Walford Mill, then apped with 100 Cameras. Somehow I always photograph the sky at Walford Mill. 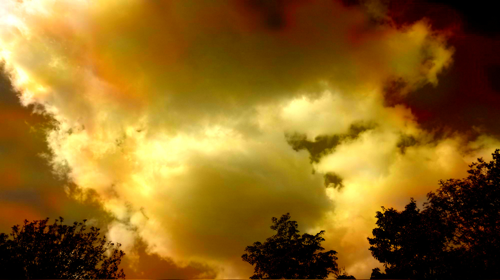 And I have started a photography course at City College in Southampton,so now my head is swimming with f stops, ISOs and whatever the other one was - oh yes, shutter speed. We did take photos, but as they were of my fellow students, and I don't have their permission to use them here, I shan't be posting any.
The course was this afternoon, and I have discovered a drawback to driving into that part of Southampton on a Saturday afternoon. Those of you who know the city may know what it is. Here's a clue - although the traffic may have been made worse by this. It's a happening place, Southampton. Unfortunately. However, I enjoyed myself, and I hope to have better photos to show as a result, both here and on Snaps.
I am still working with textiles, though - a collection of tiny weavings 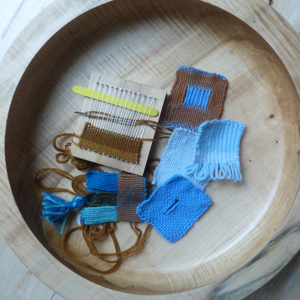 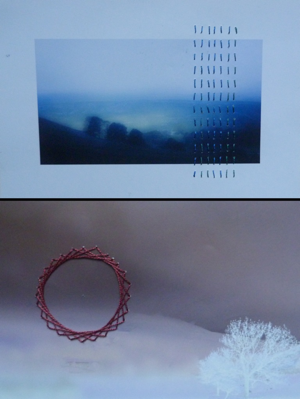 and some stitched photographs (there we go again).
I decided in bed this morning that I need to focus my textile work more, and to concentrate on the photos, the weavings and the machine embroidery (!) rather than the vessels, much as I enjoy them, as I don't know where they're going. (Most of my important decisions are made in bed over coffee. It's sticking to them that's the problem...)
Will I stick to this one? We shall see. It will depend on whether I come across any inspirational coiled baskets.
And my final achievement of the week, which I've just managed, is to work out how to add apostrophes in IOS6. (I've already had a conversation with Siri.)
Now if I could just discipline auto-correct...
Posted by Cda00uk at 18:45