The bad news - I've been summoned for jury duty in January. When I was working I would have been happy to do it, but now - I have two small children to look after, twice a week. Finding a child minder, at short notice, to do the hours I do, for the money the courts offer as compensation, and for an indefinite period? Unlikely. And unfortunately Wensleydale's disability means that he can't cope with the VHC, becaus he can't pick him up, carry him, or push him in a buggy.
I have asked to be excused, so keep your fingers crossed for me - well, us!
On the better side, Friday was Contemporary Textile Workshop day, and it was much more to my taste than the previous session. 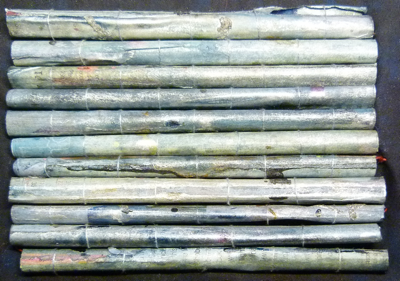 We'd been asked to take sticks - but a few tubes crept in. These were once going to be 'Saga' until I decided I'd done enough degree stuff. Never throw anything away.
Of course, when I got home, I unpicked what I'd done. Didn't like the backing, didn't like the thread. 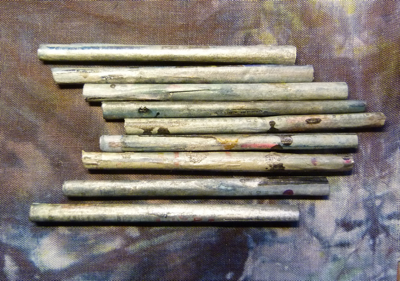 This is the second version in its embryonic stage. The background was once a drop cloth from my dyeing table, overdyed with blue - the colours work better in real life than in the photo.
I think this may become the cover for 'Moving On', and, as I have more than enough of this fabric to make a book, it will be used for the pages as well. The anarchy of the colours seems right for the anarchy of what I have planned.
So that's the first of my definite decisions gone west.
The session was based round the idea of using gold work techniques over sticks, or over the ridges in corrugated card. I did try the latter but mine was so awful I only did a tiny bit. 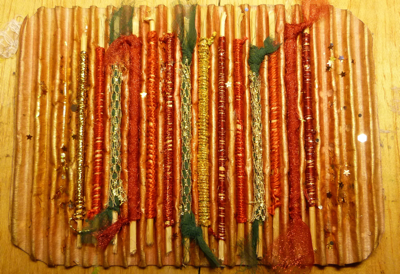 But like several of my colleagues, I played around with putting the sticks in the corrugations.
This wasn't quite how it looked when it got home. It's got a bit greener, glitterier and golder since then, I can't imagine why. It is now in the process of having some gold stitch added. 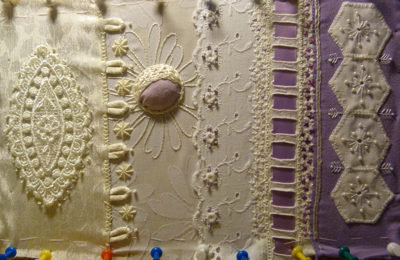 Before I got involved in silly stuff, I finished my second Karen Ruane block. (The pins are part of the blocking process, as taught by Karen.)
It is upside down in the photo, and I'm too lazy to photograph it again, so please just imagine that flower on the left is on the right, and growing upwards.
So now my work basket contains a silly Chrismassy thing, another KR block, the cover for 'Moving On', (and the beginnings of another 7 pages), a mitten which needs the top and thumb finishing, and a scarf which I started last night because I had to have some mindless knitting for watching 'The Killing' with, and the mitten needed too much concentration.
So where shall I start?
Posted by Cda00uk at 19:46

I have not been brave enough to ask Karen, but how do you feel about the big holes produced by those kind of drawing pins? Does it not matter in the end? or how do you deal with them? and if you didn't use them, what do you think would serve the same purpose?
20 questions. hope you get out of jury duty!
Sandy