does not mean that nothing has been happening at Cheese Acres. On the contrary. When the sun comes out, even intermittently, I start running around like a battery powered bunny. Well, almost. (I had actually typed 'batty' instead of 'battery', which may be a more apposite word.) 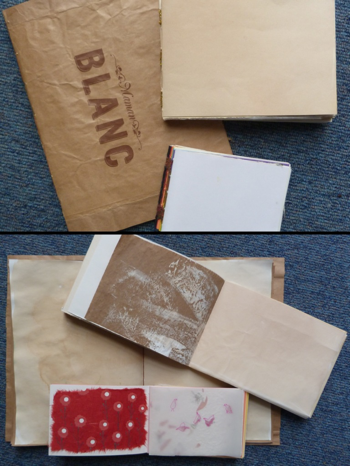 1. Books have been made.

The large one is experimental. I wanted to try using a paper bag for a cover, and to try a binding with an even number of holes, like the illustrations to the section on making a sketchbook in Sandra Meech's 'Connecting Design to Stitch'. I've written before about finding these instructions quite confusing: some illustrations show an even number of holes, as suggested in the instructions. Others show a conventional 5 hole pamphlet binding, which is what I ended up using before, for example on the smallest book here.

Both experiments worked. The cover is made from the two sides of the bag, Bondawebbed together. It's lumpy, but quite serviceable - I think. For the binding I used a sort of Holbein stitch, which looks quite neat.

Then I did what I should could have done in the first place, looked at Keith Smith's '1, 2 and 3 Section Bindings'. He shows several, including one with a similar thread path to mine, but done with two needles.

Flushed with success, I tackled the middle sized bear book, which is also an experiment. I wanted to make a Sanda Meech style book but bigger, using A3 paper rather than A4. It also worked, though I can't decide if it is floppier than the smaller ones or not. 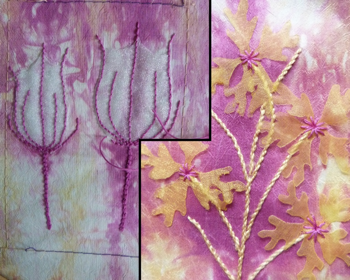 2. Embroidery has been done.

These are the last two of the series, because I've run out of the background fabric. 'Teasels' isn't finished, and I've decided to put a border round them all, so there is still a bit of work to do. However, even though I haven't yet decided if they are going to be a concertina book or a vessel, I've started trying out ideas for the backing...

3. Paint has been applied,

inspired by Lynda Monk's 'Fabulous Surfaces': when it has dried, foil and tissue paper will follow. The process described in the book sounds a bit like magic, and I didn't have any Brusho, as recommended, in the right pink, so I used another Colourcraft paint and I'm keeping my fingers crossed. 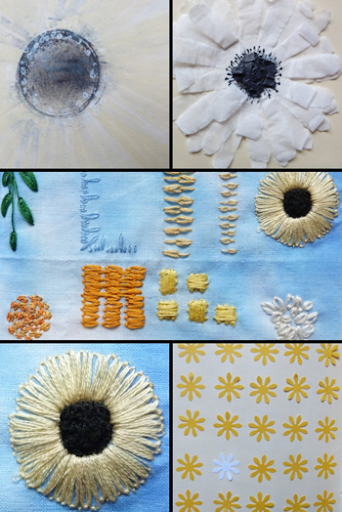 4. Sketchbook work has been done,

based on a photo on Flickr I can't find any more. I seem to be in a floral phase.

Daisies made me think of lazy daisy sttich, so there is a small sampler of detatched buttonhole as well. I like that daisy, it may reappear in another guise. 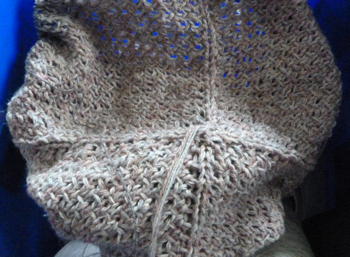 5. And finally, knitting has been done.

I had 4 largish cones of grey left over from my machine knitting days, and several odds and ends of pink and grey, so they are becoming a blanket, using 5 strands together.  I've used up the first pink odd and started an end of grey. It will be slow progress as I only knit when reading subtitles, or after child minding when I'm too tired to tackle anything which needs thought.

Love the batty!! Almost made me spill my coffee