watching cycling on the TV (Go Froome! Go Cav!) I have managed to find a little time for repetition.

Earlier in the week, after a mini sort-out of stuff, I said to Wensleydale that when I'd finished repeating, I'd start experimenting with some of the stuff I'd bought over the years and never used - like Lutradur, and metal, and foil, and - well, you get the picture.

On Friday I thought 'Why wait?' - I can repeat and experiment at the same time.

The result of this flash of inspiration was a lot of sorting through boxes, writing an embarrassingly long list of stuff to try, and spending a lot of non-TV watching time Googling what I'd found. I haven't been able to track everything down (has anyone any idea why I might have bought clear polyester sheets from Ario? They're like OHP slides but aren't - so what are they?) - but I've got ideas for most of the rest.

First out of the box(es) was some Evolon - which I bought and then decided I didn't like the texture. It is a not very exciting off-white, but you seem to be able  to colour it with all sorts of things, so as I also found some papers I'd coloured with transfer dyes, and a teetering pile of printable paper bags, that's what I tried.

This was transfer crayon (a rubbing of our garden table) over a mask of a jumble of thread. Not very exciting, but it got a bit of quilting onto felt and will go in the little brown book. 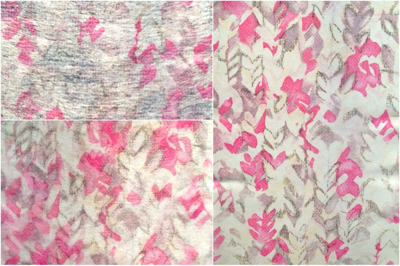 This is a paper bag. The panel on the far right was ironed straight on to the Evolon, top left is on something very translucent which may or may not be light Lutradur, and bottom left is one layered over the other. The pattern on the paper looked very fly-stitch-like, but printed off it looks less so. No idea what I'm going to do with it - possibly a book cover? (Now there's a surprise.) I also found some Lamifix, and as Google tells me you can't wash it, I decided I'd try adding it to book covers, because books are about the only thing I don't chuck in the washing machine. 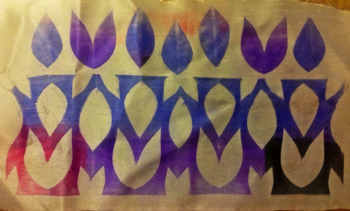 So, am I converted to Evolon? No. I still don't like the handle, it doesn't take transfer dyes as well as my favourite, in-your-face polyester satin, as shown on the left, and it makes an irritating popping noise as the needle goes through it. However I am open to persuasion if anyone has any suggestions.

It may make good book covers though, and I have enough left to experiment with other ways to colour it - like the Gelli plate, and someone suggested Inktense sticks. 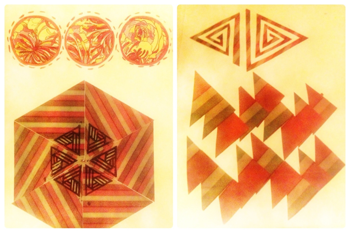 After those experiments, I went back to the tried and tested - a little repetitive collage, mostly playing with stripes, and using yet more paper bags. They weren't ironed off, this time, just cut up and Bondawebbed into my sketchbook, with a bit of felt tip and rubber stamping. I like the deconstructed triangles, and the layered ones.

Mmm - it's just dawned on me that if those sheets from Ario are polyester, I might be able to colour those with transfer dyes. I feel further experiments coming on...