And I still don't feel I've really started. I think it is because the course is largely self-directed, and I'm not used to it! (Plus there have more of the appointments we had to put off over the summer - I now have new

glasses and a new bank account. And there has been cycling on the TV. 🚵) 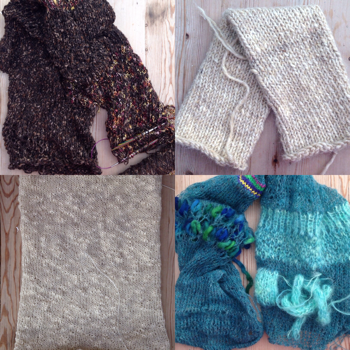 I have worked on some samples - at least one of these you've seen before. I gave up in the hand-knitted 4ply sample:

1. I didn't think it was realistic to knit several 3metre tubes in 4ply by hand, even in 2 years.

2. If I decide to go with fine yarns, the knitting machine makes more sense - if I can remember how to assemble and use it.

3. The samples I made with some scrappy ends of chunky yarns I found at uni are much more interesting anyway. I hope they will be even better when I've put them through the washing machine.

Does anyone know a good - and preferably cheap - source of chunky, neutral coloured coned yarns? The coarser and fuller of vegetable matter the better! 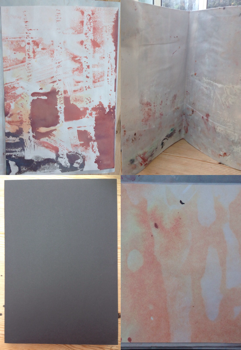 I also made a book. I've been Brushoing papers a lá Frances Pickering, and the results included some tree like forms, which I decided needed a book of their own. Which of course meant I had to paint some paper for the pages.

Not many in there yet, but there has been some 🚴 going on.

And I have been working on my essay - making notes, producing an essay plan, and planning on going to a relevant (?) exhibition. 🎨 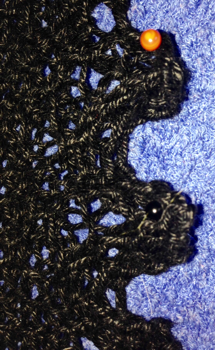 Of the outstanding tasks from BU (before uni) the shawl is finished, blocked and drying. (It's going to be a present, so just a snippet of the very simple border I decided was within my current capabilities. I have trees to knit!

I haven't blocked a shawl in ages: the last time I had a bigger spare bed to do it on, and I didn't have arthritis, but despite that I managed. I debated blocking it on the spare room floor, but that would have necessitated getting down on the floor, getting up again - and vaccing the floor first. 😱

It is a long way, but the huge mill building at Texere yarns in Bradford would be a great place for the sort of yarn you are describing.
You might also suss out vendors and ask questions by going to the Knitting and Stitching show at Ally Pally - 8-12 Oct. But you probably have that in mind. They are starting on Wed this year and the Thursday is open late into the evening.
All the best for all your plans!
Sandy