Four things I've done in the past fortnight:

1. Watched far too much bike racing on TV.

2. Taken the little guys to make some 'Neolithic pots' at their local museum. No photos, I'm afraid, because I forgot my camera, but I'm sure you can imagine some coiled pots made by a seven year old and a three year old. I wasn't sure they'd enjoy it, but they did: Babybel, who 'doesn't like trails', also loved doing the Stone Age worksheet provided by the museum, and looked far harder at their selection of Neolithic tools than she would have done otherwise. The VHC made a much better job of constructing his pots than I expected, and spent the next half hour asking what all sorts of things are made of. ('What's water made of?') We all enjoyed trying out an antler pick (those things are heavy!) and stroking the deer skins. Next week is a Roman mosaic coaster, and I think we'll be going back.

3. Worked on my latest unwearable, apparently unending glove. These things are not instant gratification, and this one is extra slow because it is colour work. Lumpy colour work. 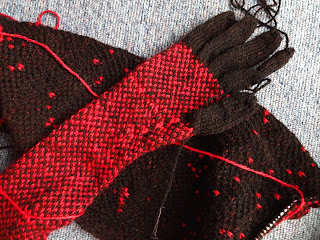 4. Sewn the 70+ buttons on the first unwearable glove. I think I mentioned that I had discovered that the buttons I thought would do wouldn't, because they wouldn't  go through the button holes, so I went back to my first idea of using mother of pearl ones. I ordered some very cheap ones from eBay - or maybe Amazon - and then realised that they were going to take weeks to get here because they were coming from China. They arrived this week, and are a little smaller than I'd hoped, but they look OK, so I've sewn them on. It was boring, and I could only face it while listening to the aforementioned bike racing. Until it got exciting, of course, when I had to stop sewing and watch. (Sorry about the image quality, my phone really really didn't like this!) 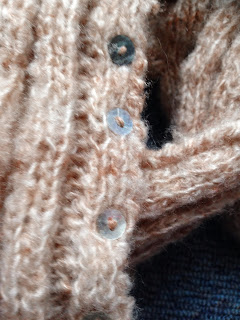 Four things I haven't done in the last fortnight:

1. Blogging. As you may have noticed.

2. Decluttering. We've done some, but the pace has definitely slowed. This may have something to do with number 1 above.

3. Uni work. Again, this may be related to the amount of daytime TV we've been watching.

4. This month's Advent decorations. (I did do June's, although I don't think I posted about them.) However, this morning I cut out some felt stars which I have been working on while listening to/watching  this afternoon's excitements. 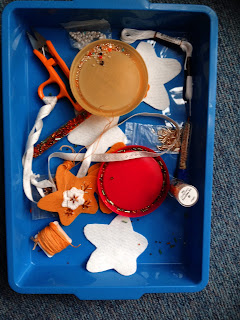 Now the racing is over, but the school holidays have started, so our time will be spent entertaining the little guys. The VHC has asked for a trip to the 'little trains' and the 'science place'. Babybel has not yet expressed an opinion, but I have no doubt we will be told before long. Granny rather fancies the Charlie and Lola trail at Mottisfont, but as mentioned, Babybel 'doesn't like trails', and regards herself as too grown up for Charlie and Lola, so granny's persuasive powers may be called into action... Perhaps a promise of fish feeding, icecream and a visit to the chicken wire horse will help?

Sorry that the layout of this is a mess, Blogger is being a bugger. Again.
Posted by Cda00uk at 16:31