1. Nowhere I don't usually go.
2.  a) Knitting. (Now there's a surprise.) What may or may not be the first glove of the degree show is finished - apart from getting a proper armature and support.

It's in double knit, and as it has taken me over four weeks to make it, and it's not really big enough (I ran out of wool), I have moved up to something a tad thicker. 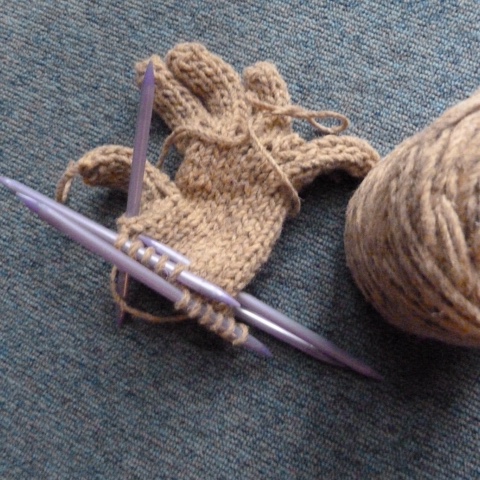 Berber rug wool from Texere, on the biggest double points I own.
Of course a week after I bought it, Texere had a half price sale. 😢 So I ordered some more: 10 cones instead of 5.😊
b) Chasing up John Lewis to find out whether or not they'd delivered my new printer for click and collection (Yes! I had to chase up JL!), then collecting said printer and setting it up. The reviews on the website said it was easy to set up. They lied. It probably was easy if the disc in the box had the right software on it. Mine didn't. I ended up having to download the drivers, and even now it won't work wirelessly, but I can live with that.
It prints quite well, but it will be better when I can work out how to get it not to print in colour all the time. It may be time to invite the family techies round for fish and chips and technical advice. Again.
On the other hand I downloaded El Capitan all by myself, twice, with only the minimum of swearing.
c) Adding more plaster to this.

I gave up trickling diluted plaster down in a delicate manner, and plastered it on with a (very small) trowel. It's lumpy and cracking and I love it.
d) Sat in a traffic jam for 2 hours getting to Uni. Fortunately I allow time for traffic, so I still managed to get there in time to have some coffee and get to my lecture. Got to get your priorities right.
e) Being ill. I had a recurrence of the ear infection I had a few years ago. This meant that when I moved, the earth moved too, only more so, and it didn't stop moving when I did. Although Winchester does have a history of earthquakes, this was a very localised one, so I did something I've never done before and made an urgent appointment at the surgery. After a very thorough examination by a nurse paractitioner, my own diagnosis was confirmed and I came out with a prescription, and a flu injection as well. Not to treat the ear infection, but because it was a good idea. Just hope it's more effective than last years.
I am feeling much better - still some problems with balancing, but the world is more stable.
f) Making and eating cake. (You can tell how much better I am!) The little guys and their mum and dad held a Macmillan Coffee morning today, so I contributed a lemon cake and ate my fair share as well.
Next week is more knitting, less cake, less sitting in traffic jams (I hope) and as little IT as I can manage.
Posted by Cda00uk at 18:55