Do you ever have days …

when you plan on getting lots of things done, and then seem to achieve nothing?

W. is out of action at the moment, due to an injured knee, so we had to cancel our outing with Mr. and Mrs. C. So I had planned a day of embroidery and unsketchbooking.

Well, I managed some unsketchbooking, although it’s not very inspiring. And some housework of course. And that’s 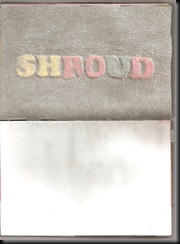 So here’s one I made earlier. Yes, I know that ‘R’ looks odd – that’s because it’s a ‘'B' with a chunk cut out of the bottom, because I didn’t have an ‘R’. [That sounds as though it might develop into something rude so I won’t pursue it.]

Tomorrow should be better as I’m going to this.