Progress has been made … 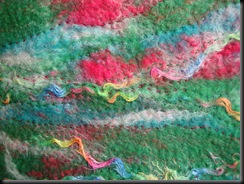 The piece of green felt has acquired some running stitch – and I have some ideas about making it stand up for itself.

After an impromptu tutorial on Wednesday I have made a few changes to the 2D piece. Much as I liked the caterpillar emerging from a strawberry, it was just too eye catching, and sadly the lovely blue fabric from Babybel’s dungarees that her mum sent wasn’t eye catching enough. I managed to find an alternative 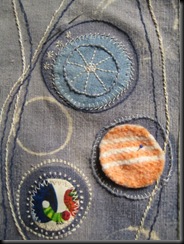 piece of the Hungry Caterpillar fabric so he is now emerging from a plum. The orange is from Babybel’s mum’s first bit of knitting for about 20 years, which I fused to some felt with the embellisher so it won’t run. The pin is temporary, to be replaced by some stitch while listening to ‘Lewis’ tonight. 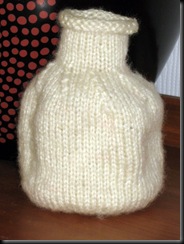 This was inspired by an off the cuff remark by someone on Wednesday.  I have made a couple of knitted bowls before, but I wanted to know if I could knit a bottle.

I could. Whether I should is, of course, an entirely different matter.

The trouble is that now I have all sorts of ideas for knitted bottles whizzing round my head.

It’s the result of my admiration for the work of Tamsin Van Essen. [Don’t look at the ‘Contamination’ section unless you have a strong stomach.]

The mermaid’s purse is on the back burner for now – 4 things on the go at once is a bit much, don’t you think? [Of course I’m not counting the everyday sketchbook, the vessels sketchbook, and the 2D sketchbook, all of which need some work …]

Nothing will be done tomorrow as we have an appointment here.

No, we’re not running [although I did suggest Wenselydale tried it now he’s so proficient on his crutches] but Babybel’s mummy is, so we are going up to help Babybel cheer her on. Go L!  Personal best we hope!

I do like that piece of felt- the colors make me feel summery!