Wensleydale decided yesterday that it was time for his annual pilgrimage to the Bronte Parsonage Museum. On the way there we made our first  visit to East Riddlesden Hall, as it was roughly in the same direction, and has a tea shop [unlike the Bronte museum – it’s only drawback, I feel]. 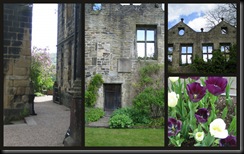 The Hall is beautiful – like Gawthorpe, it comes as a complete surprise when you turn into the drive and the urban development surrounding it disappears. Somehow the smoke stained stonework adds to the atmosphere, and of course it is part of the history of the house. One wing was partially demolished in the early 20thC  - perhaps it was the Bronte connection that made me immediately think of Thornfield hall.

Like Gawthorpe, Riddlesden has embroideries – probably the best collection of 17th century embroidery I've seen outside the V&A or the Burrell. There are also some !9thC samplers [not really my cup of tea, but these are slightly different to the usual] a bit of 20thC blackwork, and some 19thC embroidery which according the the very chatty room steward, is Persian. It was worked [in wool?] on narrow strips of hand woven cloth and then joined to make bed curtains and covers. Add beautiful gardens and a good tea shop [although they were out of Wensleydale for the Yorkshire ploughman's lunch and we had to have Cheddar instead] – and it was well worth a visit.

The journey on to Haworth was a bit traumatic, as there was a poorly signposted diversion, and the inhabitants of Bingley seem to think that the usual rules about giving way to traffic on roundabouts don’t apply to them. After it happened on the third roundabout in succession I began to get a bit neurotic, and even W. lost his cool …

Fortunately the Parsonage was quite quiet. Having seen Bronte at the Watermill before we came up here, I kept visualising the actors, especially Mr Bronte and Branwell, although neither actor really looked anything like the originals!

After all that excitement we are having a quiet 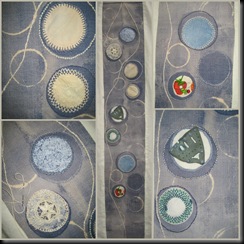 morning, and after I've posted this I will get on with the 2d piece. Since I took these photos the wavy cream lines have been completed and I’m adding some dark blue ones. I'm not sure about the very hungry caterpillar – I think it’s a bit bright, although the symbolism [new life] is right for the youngest member of the family. It is a left-over from the quilt I made for Babybel, and a substitute for the fabric from her mum and dad that never arrived, although I’m hoping that when we get back home  it will have done.

This 2d piece is looking great. I like to watch the progress. Did you got to Gawthorpe? Its where I did my City and Guilds, really lovely.