On her excellent and inspiring blog Margaret Cooter has written about being ‘energized’ by going back to college. I know what she means – but in my case it is blind panic which has led to an outburst of activity. Panic caused by finally allowing myself to accept that the 3D piece is due in by the end of this semester, i.e. February. [I can feel my blood pressure rising just typing that.]

So I had to make some decisions. The first was that I would line the drawers with some Cas Holmes inspi 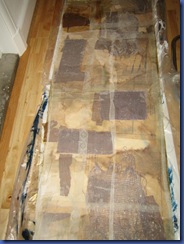 red fabric. Unfortunately the piece I made before is not big enough, so I spent yesterday afternoon making some more, while the rain drummed on the roof of the [unheated] conservatory - the only place suitable for sloshing wallpaper paste around.

Then this morning I moved the fabric inside, otherwise it will never dry. It is now squeezed between the dining table and the window, which is fine provided no-one wants to sit at the table…

Last night I got started with a sample of embroidery to put in the drawers. Yes, embroidery! Not cardboard engineering. Not glued fabric. Stitch! 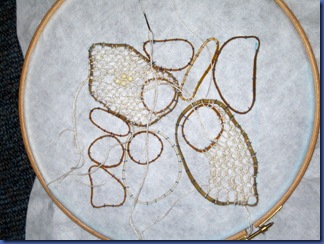 I want the drawer contents to be those everyday things we all have at the back of drawers, but used in an unusual way. Hence the rubber bands used as the cordonnets for some needle lace. [The blue threads are temporary, holding the cordonnet to the temporary backing.]

Plan A with the real piece was to use blue rubber bands as we have lots of them. Plan B was to use red ones as we have nearly as many and, as Sheila Paine points out, red thread has special significance in a lot of traditional embroidery.

But I like the look of the boring beige ones so much I had to go out this morning and buy some more, because I’ve used all we had in the sample.

This afternoon I found two more book mailers and made two more drawers for the chest, so they are all the right size, if nothing else. So I now have four that aren’t the right size, as well as four that are. I used a dud drawer to see whether sanding them made the surface more interesting- I knew they’d come in useful - and as it did, sanded the real thing.

And finally, I made some crud pulp from brown paper and PVA and tried to fill in the holes and gaps in the chest – which wasn’t as successful as I'm hoped. 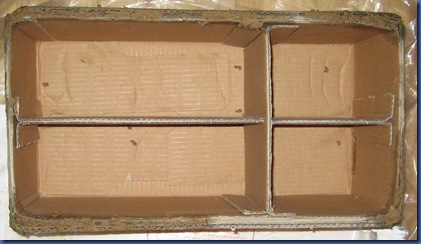 Still, I figure  I can sand it down again after it has dried.

There was, naturally, a lot of crud left so I lined an old bowl with cling film and made a moulded bowl. 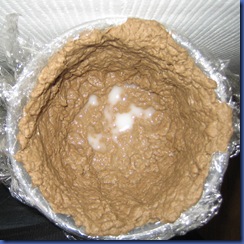 No idea if it will work, and it has no connection with the 3d piece, but I couldn’t bear to throw the crud away. [Yes, I know what it looks like…]

It is sitting on the radiator, otherwise I don’t think it would ever dry out. I would have liked to make paper with the crud but as I normally work outside when I make paper and it has been a wet, windy, January day – I decided not to.

Back to the sample tonight. I hope you realise how brave I am being using needle lace, when the external examiner has written books on it…