Did you know I was trendy?

No, neither did I. [I'm sure no one says ‘trendy’ any more, proving irrefutable that I‘m not.] Can’t work out if it’s a wrap, a top or a dress, but I like it – although I would undoubtedly wear rather more underneath. 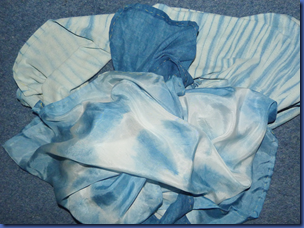 Coincidentally, I tacked up the hems on this lot yesterday – though as I was watching a bike race at the time, I was a bit distracted. Well – a lot distracted at the end.

250 metres out I was sure he was going to lose.

But he didn’t. And by the end my heart was going nearly as fast as his must have been. [Well, perhaps not quite.]

Several good things have come out of Copenhagen this year.

That was the highlight of my week. College was catching up and finding out what we’re doing this term [‘student directed learning’ mostly]. However next week is ‘print and stitch’ which meant that most of my free time has been spent assembling this lot. 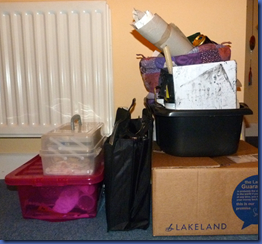 I want to experiment with printing on collaged backgrounds – which meant collaging some backgrounds, both fabric and paper. Then getting things to print with – paint, gesso, gels, Inkaid, stencils, leaves, feathers, collagraph plates, plastic bags, crisp packets – yes, that is a Guinness can  on top.

Then things to stitch with sewing kit, threads – that bit was easy. Plus the stuff I’ve worked on over the summer for a tutorial.

Getting it all out took far longer than the lesson will – and then it will have to be put back. 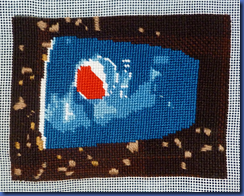 I took this in to do during lulls in college, and got so much done I was inspired to finish it – though it still needs blocking. I like it, and I enjoyed doing it, but I’m not sure it says anything about litter. So it’s into the box for the tutorial.

Tomorrow I need to go through all the other UFOs and decide what to work on next. The partly embroidered photo? The disgusting plastic bag that never got finished? Some more fake cans? Or the adaptation of a Japanese basket using a plastic bottle and plastic bag cord? Decisions, decisions…