off the face of the earth – just to the very edge of England. 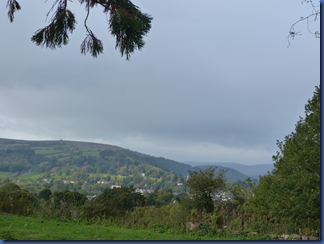 That’s Wales, over there.

We have been here to learn about organic food and cooking for vitality.

Unfortunately my vitality was a little compromised because: 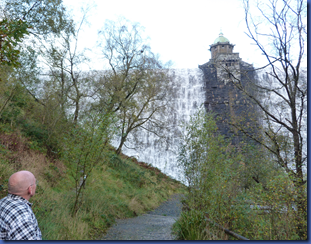 free time so went on a nostalgic trip into Wales, where we saw something we’ve only seen a couple of times in the 30+ years we’ve been visiting the area -water pouring over the Pen-y-Gareg dam. It was so spectacular I had to walk up to the dam to take photos.

If Cheese Major was still responsible for Welsh Water’s control systems, I’d know who to blame – but he isn’t, so it must have been deliberate.

On the last night we were challenged to help ourselves from the kitchen and garden and produce a rainbow coloured meal.

So, with a little artistic licence: 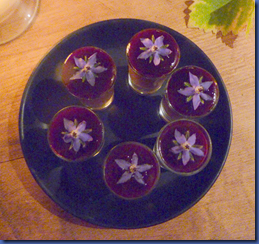 There was a gardener amongst us who could recognise borage when she saw it. [That’s a delicious dairy free chocolate mousse with damson sauce underneath, though the chef, Daphne Lambert, made that.]

And to top it all off, we were presented with a dollop of well-established sour dough starter to bring home. I was delighted because I have tried and failed to start a leaven several times. I was advised to use filtered water as our highly chlorinated stuff probably caused the failure – which makes sense, really.

So did I get any college work done?

The road to hell is paved with good intentions…

Wow - this looks really impressive if a bit disgustingly healthy (I made a peanut butter cheesecake at the weekend. Ahem). Re sour dough starter: use filtered or bottled mineral water, definitely, but also organic flour. Believe it or not, it really makes a difference. Dunno why.