with the sound of coughing and sneezing – a cold which the VHC kindly gave to his granddad, and which his granddad equally kindly passed on to me. Wensleydale, being Yorkshire bred, had soldiered on – I retired to the sofa on Tuesday and stayed there till Thursday. occasionally lifting a hand to my pale brow, dozing and whinging. Why not take advantage of a good opportunity?

I stuck it out till Friday when I decided I had to get a grip and went  to the gym – where I was gently told off for going :>(

After that we took Babybel to playgroup, while her mummy took the VHC to baby massage – where he took after his father by eyeing up the girls and then making his escape. Everyone seems to have enjoyed themselves and we will repeat the exercise next week, when hopefully we will all have recovered from our various illnesses [Babybel and her mummy were also off-colour].

I was so preoccupied with whinging I forgot to take photos on Thursday, and POT got neglected too. I made up for it this morning, which  meant I could take advantage of a wonderful frosty sky. 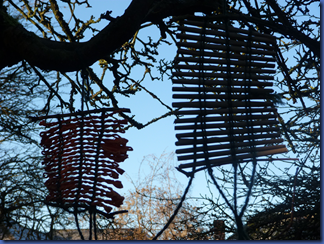 And there were other good things too. 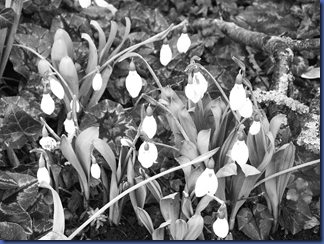 he film grain setting on my camera.]

POT is now 2.5 metres long and weight 1.4 kilos – a tad lighter than the VHC. Can you spot when Christmas was? Back to the boring standard sized envelopes now.

And this afternoon I decided to make a couple of bibs, as the VHC has outgrown the ones I made for his sister. Do you know how exhausting making bibs is? I had to give up and leave then for tomorrow.

I am feeling better – and I hardly cough at all provide I don’t stand up, sit down or [worst of all] lie down. W. is generally better during the day, which means he gets the treat of being kept awake at night by my coughing, but he hasn’t complained once, bless him.

Normal service will be resumed as soon as possible.