Mostly plastic, a few fabric, and the paper ones I forgot last time [apart from the doyleys which I couldn’t find – and I think they are probably a wee bit naff].

Love the bubble wrap, but it doesn’t really say anything to me. 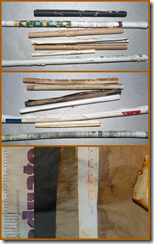 Then I decided to get nasty with my favourite samples, in an attempt to age them prematurely [premature compared with sticking them out in the garden for 6 months, that is]. This is known, technically,  chez Cheese, as adding crud.

The top lot met puff paint, UTEE and a heat gun. I found there was a fine line between puffing the paint and burning the paper, but this is not a problem. [Hey, I could cut out the middle process and just burn them!]

I’m not sure about the overall effect – the UTEE is a bit blingy [which is a problem] but the puff paint alone looks a bit like bird s**t – which isn’t.

The middle group are bleached – lovely, lovely, lovely. I particularly like the effect on the brown paper, which ended up looking a bit woody – perhaps it could do with some bird sh – puff paint?

The bottom group is my attempt at rusting. Now I think I was probably the only textile artist in the world who had not yet experimented with rusting, so I had to consult the members of a Yahoo group I belong to for advice on how to do it. Plus there is a general shortage of rusty stuff round here [I think Wensleydale was a bit offended when I asked] but with the help of some good advice, some old keys [so-so] and some wire wool [brilliant] the attempt was made. The best one was, of course, the bit of copy paper I put in because it happened to be lying around.

There is another problem you may have noticed. I rusted the edges of  flat paper and there was a certain amount of deterioration of the cheaper stuff. This is not necessarily a bad thing – but how am I going to roll and glue it? Answer – roll and glue first, rust later.

Photography and envelope rolling have also continued. Despite a falling off in post since Christmas, POT is now 2.6 metres long and weighs a healthy 1.5 kilos. 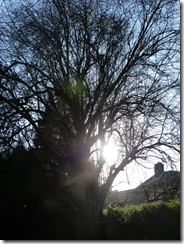 And my new photographic subject is beginning to think about flowering. 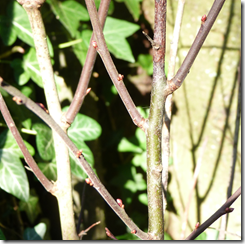 In the middle of all this I went to see the doctor – which means I have now seen a doctor more in the last 18 months than in the previous 18 years – well, almost. Turns out the reason I have been feeling so wobbly is that I have an inner ear infection, so I now have some ‘granny’s little helpers’ to control the more anti-social aspects of the problem. The drawback is that I can’t drink while I’m on them. :>(.  And as they make me sleepy, I can’t drive either. :>((