This post originally had a different title- but then Blogger lost it. I wrote it in the Blogger app on the IPad - with some difficulty, as said app is not very user-friendly. I saved it for a final check on Big Mac - but when I logged on to Blogger it wasn't there - and it had disappeared off the IPad as well. Blogger it.

Needless to say the Blogger app has been deleted - at least I didn't pay for it. 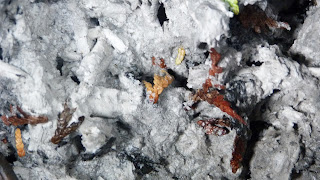 It has been a day of frustrations, starting this morning when I tried to find my tiny funnel. in order to put these into test tubes, as suggested by Terrie the tutor. As you do.

And, as you do, I couldn't find it. What I did find was this which was the last thing I turned the workroom upside down looking for. And my copy of this, which I was dimly aware I hadn't seen for a while. But no funnel. And although Wensleydale found another one, by then I'd got the bit between my teeth, carrying out the rearrangement of the workroom I'd planned since I went to Hobbycraft last week to buy a zip, a pen, and a rotary cutter blade - and came back minus the pen but with two sets of storage drawers. Well, they were 20% off...

So the room now looks tidier - temporarily - and emptier - partly because of a bin full of dejunking, but mostly because a lot of books are on their way to the spare bedroom, which W. has lined with shelves. There is still room for  a bed, if we ever have any visitors, although I'd have to move the detritus of 2.75 years of a Foundation Degree off it if they actually wanted to sleep in it.

The ashes have not been bottled, but I have put the funnel in A Safe Place fior later.
Posted by Cda00uk at 19:00

Hi! If you go to New posts, but click the close button at the top, it should come to the page where your various posts are listed. It might be listed there as a draft or some such?
If so you can resurrect it, edit it and repost.
If not...sorry :(
Hope you find the funnel.
Sandy