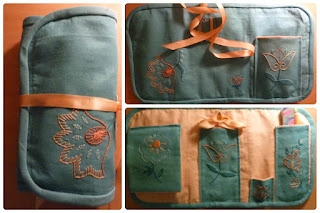 with this - my old fashioned hussif made using old
fashioned [and old] transfers. As always when I end up making something like this, I end up with a list of 'if onlys' - if only I had measured my scissors before I made the scissor pocket - it's too big for my small  scissors and too small for my big scissors. Maybe I'll have to buy a middle sized pair? If only I hadn't  rounded the corners, so I didn't have to make bias binding which took two attempts to apply even reasonably well. But I loved doing the old fashioned embroidery, [so much so that I've started another one] and my satin stitch is much better than it was. Not good, mind, just better... 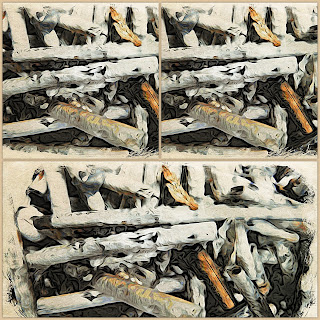 I have also been playing around with the new toy. A while ago I discovered Dave Loveland's I365 project, fascinating to one who enjoys mucking about with photographs, but at the time I didn't have the technology. Now I have, I've been trying out some of his recipes.

It's been fun to follow Loveland's recommendations, although it does tend to lead to spending money in the sweetie shop that is the app store.

Tomorrow we resume our grandparent duties, as Babybel and VHC's mummy has gone back to work, but after that I know I have to get back down to college work after this little holiday.
Posted by Cda00uk at 22:16