though my productive life seems to have slowed down again. This is due to:

and did I mention watching the cycling?

Now all those adrenaline rushes are over for a while - we did try the BMX but didn't get hooked, although now I know why I keep seeing young people on bikes which look far too small for them. I'm hoping we get some coverage of the Vuelta and the Tour of Britain, but I'm not very optimistic.

During the cycling I made several scrunchies - it was something I could pick up and put down when things got exciting. I would have shown you a photo - but someone spotted them on her morning here and they disappeared off to nursery with her. One in her hair, one on each wrist and one on each ankle... 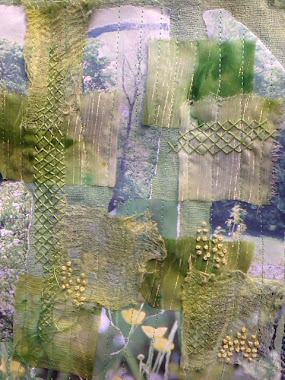 I have been fiddling around with this. The idea came from Jae Maries' book 'Contrasting Elements' - photos and fabric and stitch. It's stalled for a while because I think it needs a bit more stitch, but I'm not sure what - or where. Quite like it, though.

I've also been mucking about in sketchbooks (yes, plural) one for the 'mapping' homework for the course I've finished [still no formal results :>(] and one more general one, which was originally intended to be about my (also stalled) basketry experiments, but morphed into somewhere to try out almost anything. Also 3D pieces don't fit very well in a sketchbook,,, 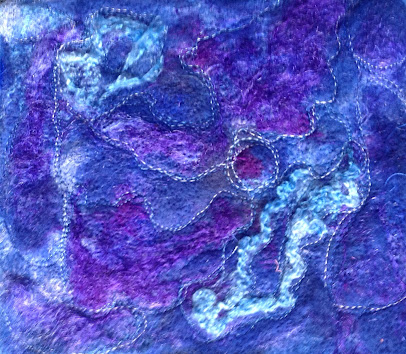 Oh, and there's this - which, as I had the embellisher out, emerged after reading an article by Jane LaFazio in issue 45 of 'Quilting Arts'. It was going to be green, in keeping with the mapping/landscape theme, but then I found a little collection of blue embellishing stuff (looked like a kit I'd forgotten about), so it turned blue. LaFazio suggests machine embroidery after felting, so it got some. It's not quite as purple as it appears, and looks like an aerial photo of the sea to me, so perhaps it fits in with mapping after all. 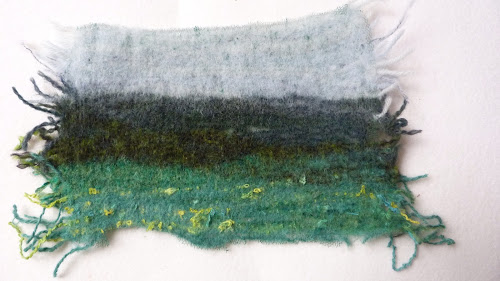 Now, like this piece and the Jae Maries one, its's waiting for me to come to a decision about hand stitch.

The embellished pieces are especially interesting/challenging because I would like to preserve the double-sidedness of them, but I'm not sure how, apart from the rather cliched roll them up into a cylindrical vessel thing. Anyone got any bright ideas?

After the cycling finished one evening, I tried another app, Fotoffitti, which sort of Banksyfies your photos. 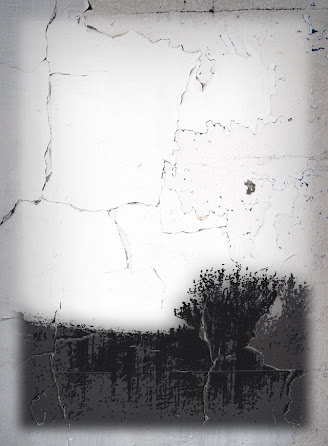 You can change the background, image colour and intensity, but not the shape, so odd sized images get truncated. However, I like what it's done to the tree from the landscape. 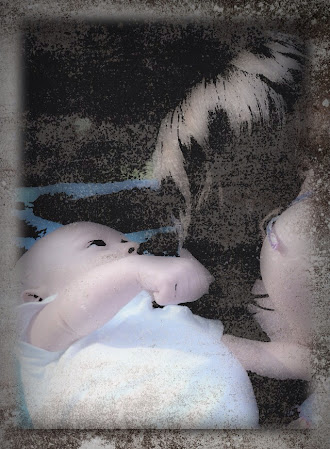 As before, I found it hard to get anything I liked from the portrait .... 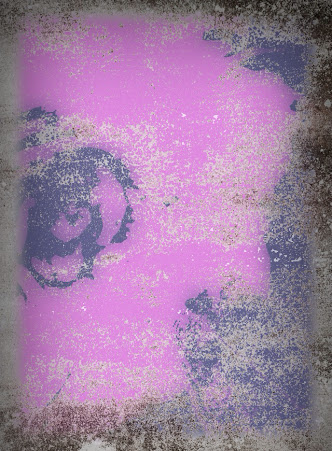 and the camellia turned out quite abstract. Bits of this look like cross stitch, so I wonder what would happen if I put it through an app which pixelated it?

Another one trick pony, but an interesting one.

bright ideas...put it in a frame - like an embroidery hoop or a gallery wrap canvas without the wrap canvas part. then suspend it in the centre of the frame with long stitches to the sides. then hang so as to see both sides.
Whatcha think?
Sandy