(I diagnose too much exposure to Dr Seuss.) But I digress. Thing 1 was the 'Attack' series I posted about lat time. (I suppose that should be 'Things 1'.) They were the last bit of the last lesson of 'Embroiderer's Ledger' (although not my last use of the techniques, or the ledger), and I knew if I put them on one side I'd never finish them.

is this. (Haven't blogged about it either.)

Four of the bits I made in the last Contemporary Textile Workshop, embroidered, mounted, and turned into an accordion book. The next CTW is sometime next month (my diary secretary isn't here right now), and again, I wanted to get it finished because I was afraid I wouldn't, if you know what I mean. I wasn't sure quite what we were supposed to do with what we'd made, so I did my own thing. (Now there's a surprise.)
I'm pleased with the result, both in itself, and as a try-out for an idea I've had for a book for our exhibition at the NEC next March. (Which is something else I need to get started on, pretty soon.) (And which will look nothing like this.) 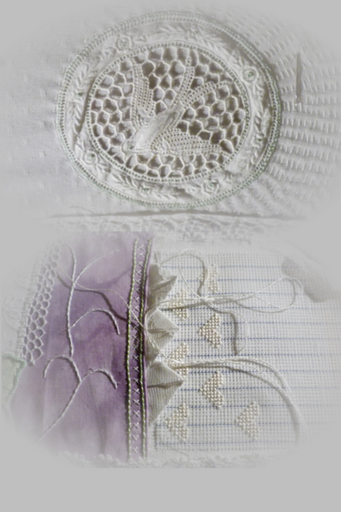 Finishing that left a little time for some embellishing.
I'd love to claim that I made the little bird motif, but I cannot tell a lie, it was one of several I found in mum's stash when I inherited it. This seemed a good time to use at least a couple of them.
You may also be able to see an outbreak of cross stitch on the waste canvas at the bottom. Long time readers of this blog will know that I hate cross stitch.
Never say never. Still don't like it, but it looks so effective on Karen's pieces, I decided to give it a try. I've been breaking up the monotony by working some of the other sections in between hearts.
(Mmm - rereading this, I seem to have used up this year's supply of parentheses.) Whoops, there's two more gone...
Posted by Cda00uk at 20:18