with my Karen Ruane piece. 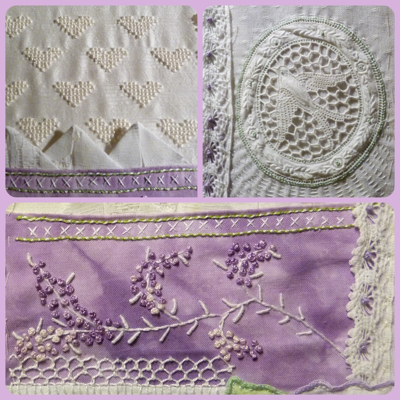 Look at this piece and admire the dedication that made me tackle two of my least favourite stitches - cross stitch and bullion knots.
I must admit that I love the look of the cross stitch hearts on silk, so much that I bought some more waste canvas.
And my bullion knots are better now that I know the right way to do them (milliner's needle, wrap clockwise). Not good, you understand, just better.
The more I do on this piece, the more I like it. I can see so many things that I could have done better, but I still like it. As there is a lot of stuff in it which I inherited from mum, I find myself thinking about my somewhat ambivalent relationship with her as I work on it, which is quite bittersweet, and adds to the process.
Working on it has reminded me how much I enjoy flitting from one process/stitch/patch to another - low boredom threshold! Only having a little bit of cross stitch or a few bullion knots makes them tolerable and doable. And, as Karen points out in her videos for the course, you can always add more. I like to kid myself that I have a 'less is more' aesthetic, but  sometimes nothing succeeds like excess.
I think it may become a work in intermittent but continuous progress, as I make more blocks to add to this one. 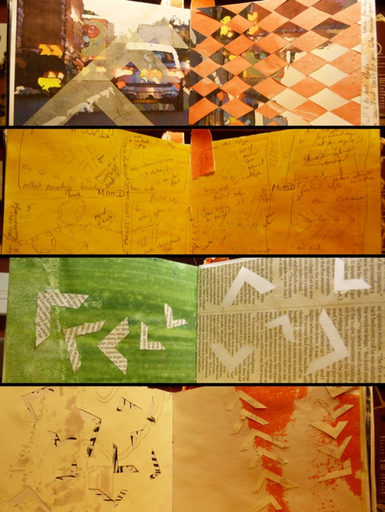 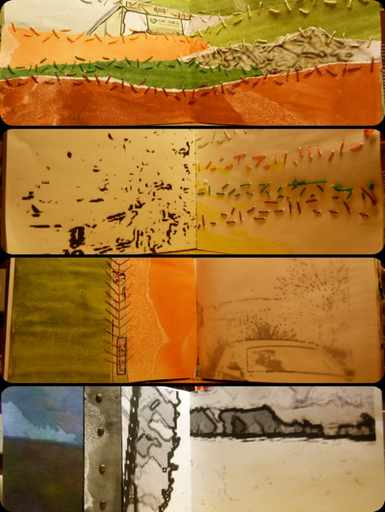 That led to some explorations of ways to join fabric together - only with paper. They are mostly stitch, although I have to admit that a little glue was involved, purely as a temporary measure, you understand.
The second image is the reverse of one side of the first one, and I included it because I like the way the backs of the stitches seem to develop from the black marks on the left - a B&W print of the over-enlarged detail of foliage on the right of the top image. The foliage is in the apped photo of a truck at the top, except I ripped that bit off.
I trust I make myself clear? 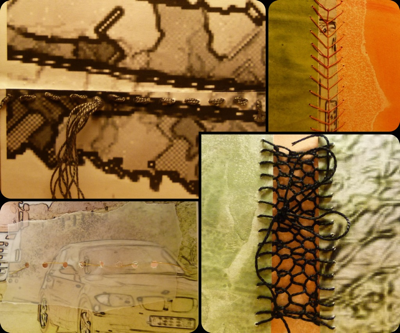 More joinings. I vaguely remember doing something similar for City and Guilds, except that variations of faggotting were involved in that one, and mine, which was black and magenta, ended up looking like a section from a tart's corset. Which in turn reminds me of the Rocky Horror Picture Show, although I don't remember any magenta corsets in that, even on Magenta...
And as I correct yet another nonsensical autocorrection, I must point out that any post which is even more gibberish-ish (yes, autocorrect, that is what I meant) than usual is all the fault of Paddy the iPad (maybe).
Posted by Cda00uk at 17:53