Make spray while the sun shines. 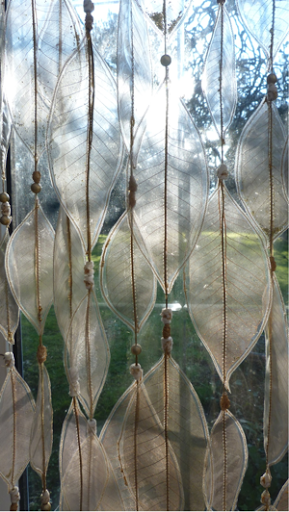 It's Contemporary Textile Workshop on Friday, and the task is to make a garment for Eve. So of course my thoughts have been running on leaves. Predictable, I know, but reinforced when, in one of my tidy-ups/searches for something else I found the leftovers from this.
I decided Eve would probably want something a bit more practical, so after experimenting I decided on a wrap made by appliquéing skeleton leaves to a bit of cream voile curtain, left over from Cheese Minor's 4 poster bed period. (It was a very contemporary  4 poster bed.) And I decided to add some colour to the voile, to make it more interesting.
I've already painted two pieces without really liking the result. (There was a lot of left over curtain.) So, as the sun was shining, I thought I'd experiment with spraying another bit outside. I'd originally thought of gold spray paint, but decided that was a bit too blingy for Eve. Plan B was diluted acrylic ink, if i had a suitable colour. And if I couldn't use a spray can, I'd have to find my mouth diffuser.
In the process of finding looking for the diffuser, I found some walnut ink crystals, and a couple of pump sprays. The latter turned out not to work any more, but the former was fine. I decided it would be easier to use a recycled kitchen cleaner spray - less puff needed and I wouldn't have to find a way to hold the fabric upright with leaves on it. (Not the skeleton leaves. Real leaves.) Plus I wouldn't have to find the diffuser. 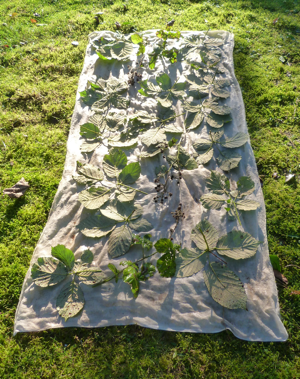 We do have a fig tree, but it is January after all, so there was a slight shortage of leaves. I had thought of using ivy and cupressus, but I noticed that the blackberries still had their leaves, and they are a bit more figgish than ivy and cupressus.
I wandered down the garden to the only patch of sunshine, armed with fabric, scissors and spray full of walnut ink.
Whoops. The fabric needs to be damp. Back to the house. Did I mention that we have quite a long garden?
Dampen fabric. Go back down the garden. Replace blackberries. One of the disadvantages of blackberries, compared with figs, is the thorns, which insisted on sticking to me, or the voile, or both.
After I'd taken the photo, I realised that putting the fabric on the grass was probably not a good idea. Fortunately there was a large bit of polystyrene packaging in the conservatory. Back to the house. Back down the garden again.
I managed to ease the voile and the blackberry leaves on to the polystyrene, which was almost big enough. One of the advantages of blackberries, compared with figs, is the thorns, which fortunately stuck to the voile. 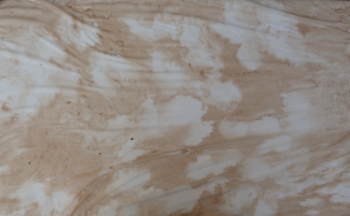 After lunch, when the sun had gone from the garden, I brought everything but the leaves into the conservatory. Just hope it will be dry by Friday.
It is definitely better than the painted pieces, but I do have an unpainted piece as well,  just in case. Plus another piece, crumpled up in a cat litter tray, and sprayed with the last of the walnut ink.
This evening I have screwed my courage up to add a couple more swooshes to page 3 of 'Moing On', I have also tacked down all the component parts of page 5. So the next few evenings are booked for fly stitch and appliqué.
I did find my diffuser in the end. I'd put it with the spray inks, for when their pumps stop working. Obviously.
Posted by Cda00uk at 20:48

This was a wonderful saga! Sort of like my efforts at things outdoors turn out to be!
and maybe today you could snowdye? we haven't got enough for it yet though.
Sandy