When life gives you snow... 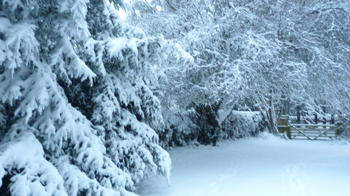 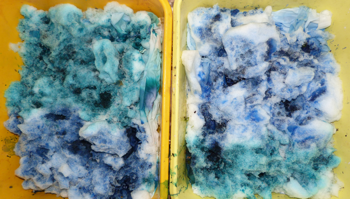 do some snow dyeing. It was all a bit ramshackle, because it must be at least 2 years since I last did any, and I couldn't find the instructions I used then. This is the drawback to throwing out lots of printouts on the grounds that you can always find them on line...
I think last time I used a grid to hold the snow over the fabric, but which grid I have no idea. And as always, I forgot about threads till the last minute, so they got too short a soak in soda before going into the cat litter trays vat with everything else.
I found one set of instructions which involved stirring the dye into the snow and tipping it over the fabric, but I bottled out of that when I realised how much snow I needed. (A third of a table top, 10 cm deep, for each.) So I put the snow on top of the fabric and poured the dyes over the snow.
I'll bag it up for batching later on. Nothing else is going to happen to it till Tuesday afternoon, and possibly not till Wednesday, depending on whether we are needed on Tuesday to look after a poorly, poxy VHC. (We knew something was up when he went off his food. The VHC never goes off his food.)
When not spreading blue dye over the house and garden, I've been working on some designs for yet another Karen Ruane class, called 'Alchemy'.
Yes, I know I still haven't finished the work for her last class, and I've got a book to make for the NEC in March, but I find her ideas so inspirational that when she offered another class I couldn't help but sign up. This one explores the design process from first idea to product (notice I didn't say 'finished product').
My theme might be described as Lancashire mill girl meets Japanese Boro cloth. I've researched my family history, and unsurprisingly, given where I come from, most of my ancestors came from Lancashire - apart from the Yorkshire ones. And all of them were working class. And where did working class Lancastrians work in the 19th century? In the cotton mills, of course. About a fifth of those I've traced so far worked in the mills, and others were dressmakers or hatters. Textiles run in my blood. 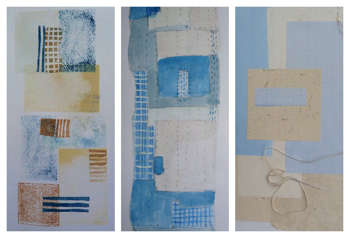 Given their low incomes and large families, I think my foremothers probably spent more time mending than doing embroidery - which led to ideas about patched and darned cloth, and these stamped, drawn and collaged ideas. Apparently mill girls wore long aprons called 'brats', so I have a vague idea of making a Boro-ish apron. Or perhaps a book. Or just a cloth.
But as soon as I've finished adding stitch to the left hand collage, I'll be back to 'Moving On'. Honest!
Posted by Cda00uk at 16:40