Having said it was 'nearly finished' over a week ago, here at last is the completed 'Florilegium'. 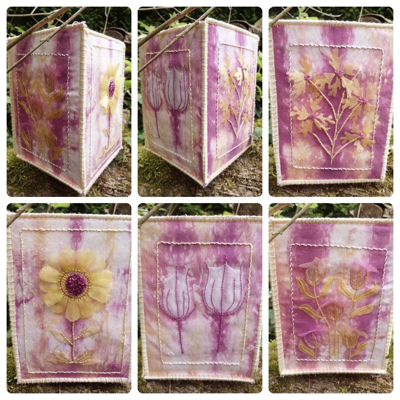 It took rather longer than anticipated, partly because sewing it together was hard on my hands, partly because it was difficult to photograph - these are the results of my third attempt - and partly through idleness.

It has,as they say, been a learning process. I learned that working machine satin stitch on craft Vilene with a top stitch needle is not a good idea - the base, which is just Vilene with no fabric, is already splitting. I also learned that it would have been better to sew the sides from the top rather than the base, as there was slippage. And I also learned - or rather confirmed - that I do not  like craft Vilene. Should I make anothe vessel like this I will have to find a more sypathetic and practical way to stiffen the sides.

But I like the finished piece, with all its faults. 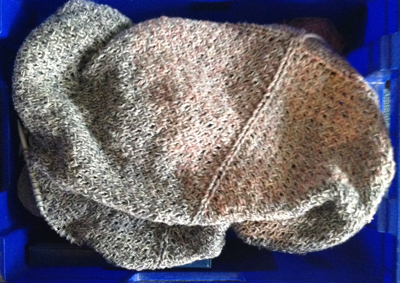 Since finishing it I've been in a creative slump. I've done a bit of sketchbook work, and I've got lots of ideas, but nothing is coming to fruition. Fortunately I have the pink and grey blanket knitting, which is making steady progress both during Swedish and British TV programmes.

On a more positive note, we had an enjoyable trip down to Bourenmouth last week, to see Cleo Musso and Matthew Harris's  exhibition at the Russell-Cotes. We had seen Musso's colourful mosaics before, as she had a show there the first time we ever visited the R-C - but although I knew about Matthew Harris, of course, I'd only seen his work in photos. Like most textiles, it is even better in reality than in print. The exhibition was inspired by Japanes artefacts in the R-C, and by a trip the two artists made to Japan. A fascinating show, made even better by display cabinets showing the artists' sketchbooks and 'left-overs' of the materials they used.

And although the cafe has changed hands, it is just as good as it was - lovely scones. We did miss the old  sea-inspired deco though, the new style is a bit mundane!