But after going to the latest CTW on Friday (more of that anon), I decided it was time to finish what I'd started. (It could have been the mention of the end of of year exhibition which did it.) 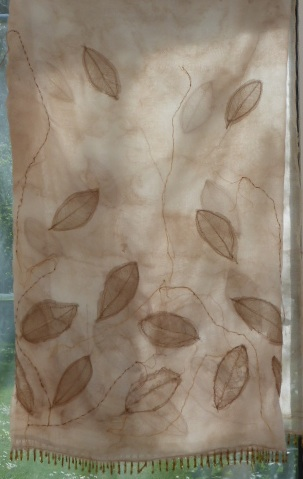 When Eve was cast out of Paradise and had to make herself some frocks, she had to use what was available - some leaves, some old curtain material which she sun-printed with walnut ink, and some bead trimming she'd inherited from her mother. (Wensleydale quibbled about the last bit.) She also seems to have had a sewing machine... 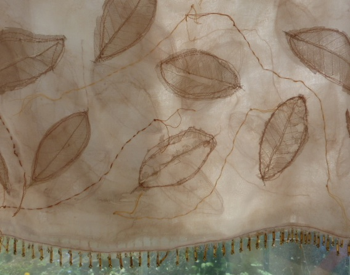 I put it on a skirt hanger for the photo, it is actually three times this width. I like the way the back lighting (sunshine!) makes the other layers show through.

Some of the leaves are beginning to disintegrate, but that and the dodgy machine embroidery are, of course, quite deliberate. Hey, it's been around several million years, it's bound to be a bit tatty! 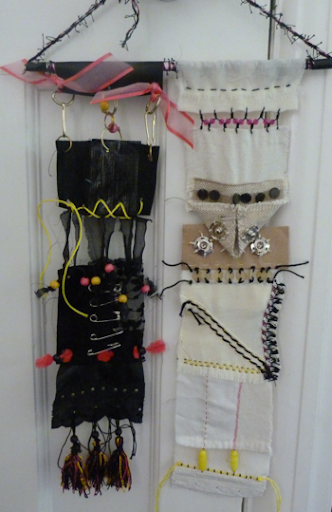 I started the cream side in college - 'conventional' seams using stitch and haberdashery. Someone mentioned band samplers, so that is the reason for the shape - although you can be forgiven for not seeing the connection.

We were supposed to move on to less conventional seams in the afternoon, but I didn't get round to it, chiefly because I insisted on hand sewing the seams.  A hand sewn French seam on the bias is not a good idea.

Wensleydale said that when I bring stuff back from college it always looks boring (he was much too scared polite to use that word, but it's what he meant).  Then I disappear into my workroom and come out with something more interesting silly.

So the conventional seams got some dayglo sttich and beads, and I decided to make a separate piece for the unconventional seams. There are small dog lead clips, split rings, lacing (hope that counts as 'not stitch'), safety pins, ties of various kinds, duck tape, brads and a pipe cleaner through holes. I made a lot of holes.

Then I found a wrapped tube I made right at the beginning of my tube obsession, which happened to be black, cream and magenta. (Perhaps because I like those colours?) Once I'd decided hang them up, a silly cord was called for. Then the black side was slightly too short, so I added some silly tassels to extend it. (It was not a good idea to drop one of them in the kettle when I was trying to steam out the kinks.)

Pretty it ain't, but my principle in life has always been, you may not be good-looking, but at least you can make people laugh.