so it must be 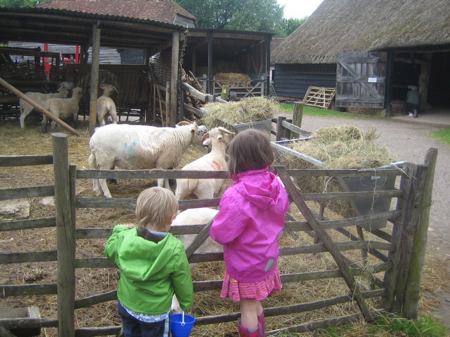 Manor Farm. This is the first time the VHC has been old enough to participate properly - including feeding the wack-wacks and chick-chicks, although he wasn't interested in feeding the four legged animals. Fortunate, really, because it isn't allowed. 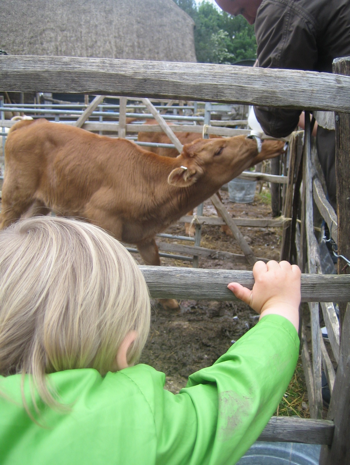 He watched Abigail the cow being milked with great concentration - but I think he felt rather disappointed when the end product was given to the calves. He is very fond of 'juice' - his word for milk.

Babybel enjoyed herself as well, mananging to wangle being the first to get a go at milking, which she adores doing. 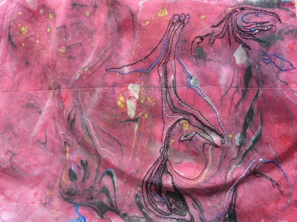 When not visiting farms in the rain, I've been having a sort out, in the course of which this materialised. It is a piece of marbled silk, which I think I made on the C&G sketchbook course about six years ago. (Other people marbled paper for their sketchbooks, I marbled fabric.)

I've been looking at the work of Leonora Carrington, and I think it's had odd effects on my psyche, because I began to see all sorts of bizarre little figured in the marbling. (Perhaps I like her work because of my odd psyche.)

I forgot to take a 'before' picture, but the section on the left has not yet had any stitch.  I have no idea what I'm going to do with it when it's done, but it's fun to work on. I put a backing cloth on it, thinking of adding some Trapunto and Italian quilting, but now I'm not so sure. Watch this space. 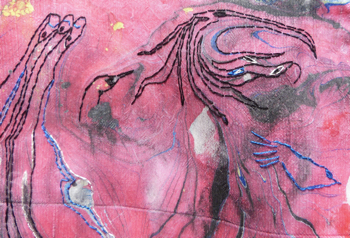 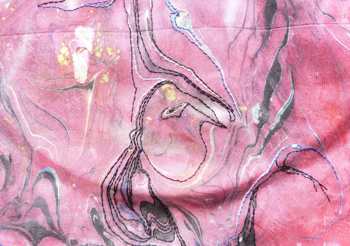