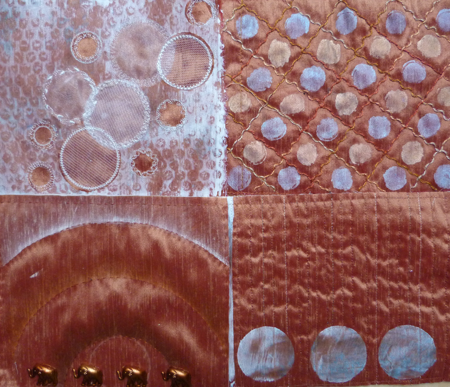 Though not without some anxious moments. The top left page has drawing pin stitched circles - OK apart from the appliqued fabric not lying flat - and the smaller flower stitcher circles. First I had to remember how to use the flower stitcher, the instructions not being completely clear. And then I realised that the machine wasn't stitching out the patterns I had selected. They were interesting variations on zig zags, but bore even less resemblance to the diagram on the machine than they usually do.

Quiet panic set in - was I going to need a new motherboard? I have just had a welcome tax refund, but nowhere near enough to pay for a new Bernina motherboard!

At least I think that's what it was - it stitched OK as soon as I tried it without the flower stitcher. 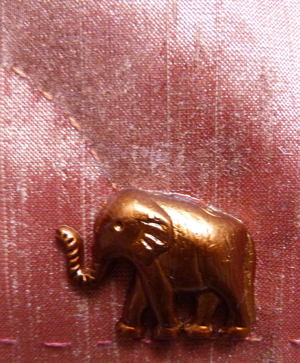 On the positive side, I had an idea what to do with the very boring bit of hand quilting below the flower stitched piece. It was coloured with Markals but it seems to get paler every time I look at it, so it definitely needed a lift.

The answer was elephants.

I bought them ages ago and never found a use for them. I had to glue them down - no stitching holes - but they definitely improve the page.

The other two pages are pretty ordinary but, to tell the truth, I'm getting circled out.

Just two more to go. Some more boring quilting, machine this time, which is going to get some couching over the top. It was coloured with spray paints which are also doing a vanishing trick.

The other one is the sunprinting, which I didn't expect to work, but which was very successful. More couching for the larger circles - I'm pondering on what to with the smaller ones. Buttonhole rings come to mind...

Then a quick Japanese style binding and no more circles! Probably. 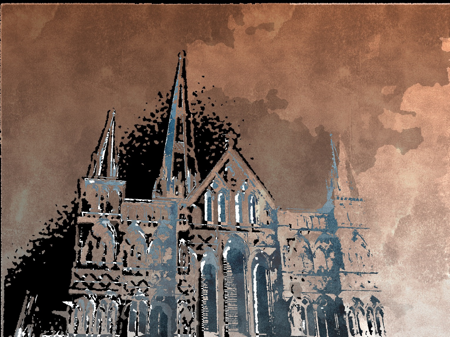 And finally - an apped-about photo from our Wednesday wander. We went to Salisbury to see the Rex Whistler exhibition at the Salisbury Museum, which is recommended, and I took a few photos of the cathedral, to play around with. I'm rather pleased with this one. Apps were XNSketch, Popsicle and iColorama, to blend the other two together.