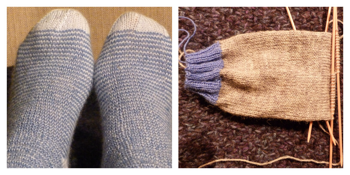 1. One pair of socks finished and another started. Somehow I always have more wool left from each pair than I'm prepared to throw away, so the half ball of mid blue had to be incorporated in the new pair - yes, it is the same colour. I did manage to bin the few metres of the light blue left over after I got two pairs out of it. 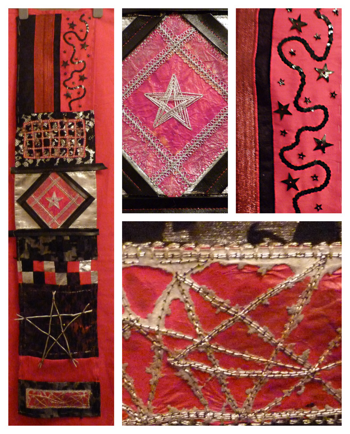 2. The Chair's Challenge seems to have taken a great leap forward. (Good thing, since it's the next meeting of Visual Marks on Tuesday. Time to get lost in Southampton again.)

This is it, hanging around while I decide whether it needs anything on that lower red horizontal band. It is going to get some star sequins on the Tyvek rectangle at the bottom, and there are paper stars on the red on black lattice - they just don't photograph well.

It is not attached to the backing yet - when it is, it will be a little straighter.

I have no idea how I am going to suspend it, and I fancy a few tassels somewhere, but these decisions will be made in due course... 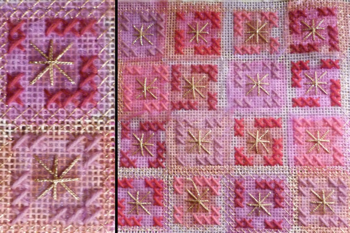 3. Progress on the Contemporary Textile Workshop piece has been slower, partly because I've been concentrating on the star spangled sampler above, and partly because the CTW is cross stitch, and regular readers will know that I don't do cross stitch, especially not in uncontrollable metallic machine embroidery thread.

4. And just in case I didn't have enough to do, I've signed up for Dijanne Cervaal's 'Traveller's Blanket' class, because it looked like a good way to use up some stash. So I started by buying some muslin (I thought I had lots, and will probably find it again now I've bought some), and some bump, which Dijanne  recommends instead of wadding. So yesterday was spent dyeing, which I haven't done for ages. 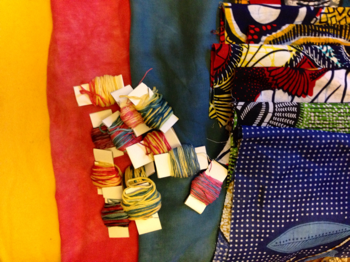 Here are the results, plus some threads I dyed at the same time, and some African fabrics from my stash for the appliqué.

Did you know that so-called 'African fabrics' were based on Indonesian batiks and originally made in Holland or Lancashire? Must be true, it said so in 'Embroidery' magazine. So some of my Lancastrian ancestors may have worked on the original fabrics, though I am pretty sure these were made a long way from the North of England.

Bite off more than I can chew? Moi?