It's been one of those weeks... 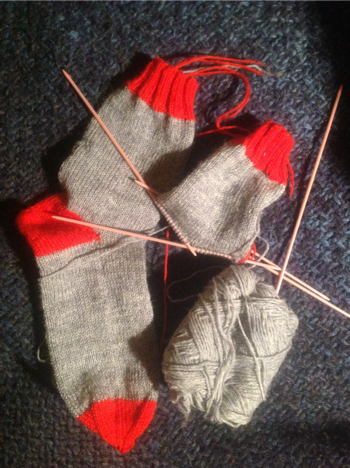 However it was all a bit time consuming and for most of the week, the only creative thing that happened was sock knitting. 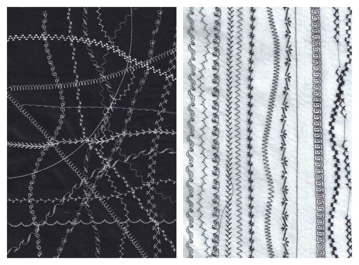 Before it all kicked in, I did get a chance to try out my bright idea for the machine networking from Visual Marks - inlaid appliqué. 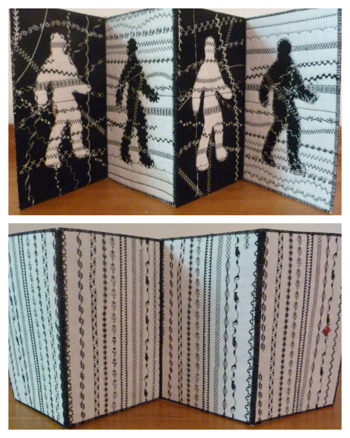 to this. It's OK, but if I was going to do it again I wouldn't try to cut felt with a craft knife! 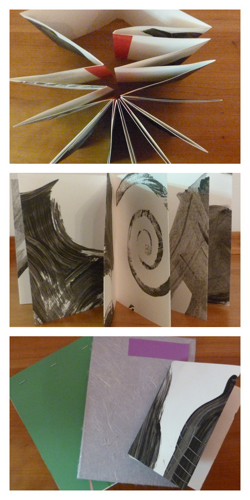 So as most of the stress is now over (one big stressor is still around, but it is being tackled) I disappeared into my workroom.

At the beginning of the year I challenged myself to make a book a week, so here are numbers 2, 4 and 5. (Number 1, a pamphlet about our trip to the Spinnaker Tower, has gone to its new home, and I can't find number 3, although you can see it here.)

Number 5 is a circle accordion from Alisa Golden's 'Expressive Handmade Books'.  I followed her suggestion to use prepainted paper for the pages, with the idea that I might doodle round the pre-existing  marks.

Will I keep up weekly book-making for the rest of the year? Highly unlikely, but I can dream. 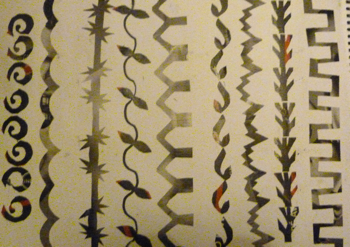 I also found time to do a bit of sketchbook playing for Visual Marks. Machine embroidery is all very well, but those stitches are a bit small. So I decided to try reproducing the patterns in cut paper,

Can you spot the deliberate mistake?

I have ideas for more VM playing tomorrow, plus a commission for a tooth fairy pillow. 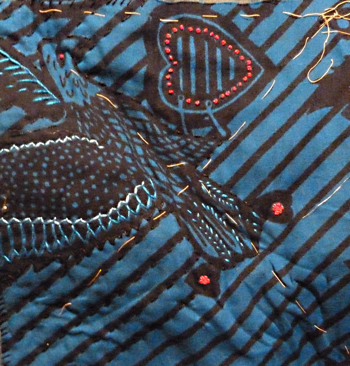 The Traveller's Blanket has been on the back burner - this is as far as it's got. However, not only is it good sitting-on-the-sofa-listening-to-the-TV/Radio 3 embroidery, it is particularly good sitting-on-the-sofa-listening-to-the-TV/Radio 3-on-a-dark-and-stormy-insomniac-night embroidery, because it is about 1.5 metres square and warm.

However, I think tonight will be knitting again - there is something so comforting about it, on a filthy night like tonight. I hope, wherever you are, the weather is a little dryer, or if not, at least you have escaped the floods.