The weekend after the week before...

has been very productive, I'm glad to say.

Although I have officially finished the last Visual Marks challenge, I can't stop exploring ideas inspired by the session. Lots of ideas! I don't think they will lead into anything in the long run, but it's fun seeing where they take me.

My first idea was to do more automatic stitching, but with some variations - like not on felt, and trying  different colour combinations, and not having anyone else to add their bit - as Wenseydale doesn't do machine sewing. I started just after the Visual Marks session, but it got shelved when I realised I'd have to make four. But this afternoon I fired up the Bernina and got cracking. 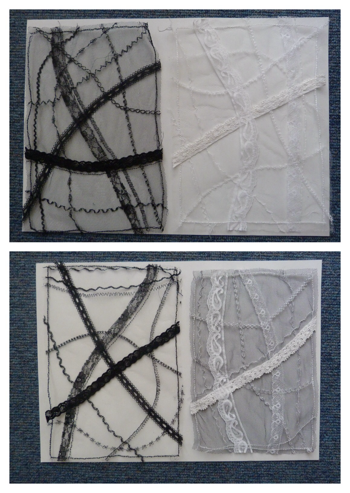 This is the result. I used net, backed with Solufleece, which I had not used before and was impressed with - although I found out the hard way that ironing it is not  a good idea. I added some bits of lace as well as the stitching.

My favourite is the black lace on white, bottom left, which has a floaty look I like. No idea what to do with any of them, though!

I suppose if, by any unfortunate chance, I was asked to provide a bridal veil for the upcoming wedding, the white on white version might lead to something, but I don't think it's going to be that sort of wedding, somehow. I hope. 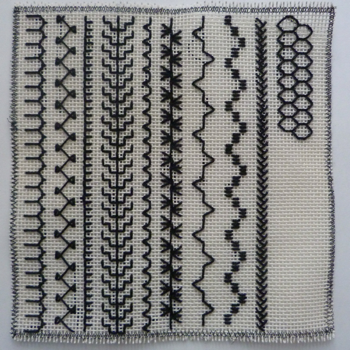 As an alternative to machine stitching, I decided to up the scale a bit, and try to reproduce the machine stitches by hand. I suppose, if I had really copied the machining I'd have used couching, but instead I worked on canvas. I'm quite pleased with this, although there are problems with the layout - and as you can see, it's not quite finished.

The next step is rug canvas - I kid you not! 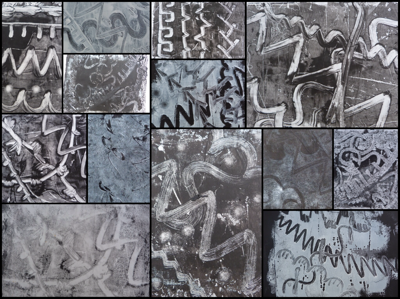 I realised as I slaved over a hot sewing machine this afternoon that my experiments are of two types - stitches, and stitch-like marks. (I'd like to pretend this was deliberate, but it just happened.) I had lashed out and bought myself a big Gelli plate as a late Christmas present, so yesterday I made some simple monoprints of marks inspired by the machine stitches. Some were better than others, but there are a couple I really like - I'm thinking book covers.

This is the first time I've used the Gelli plate when it wasn't red hot in the conservatory, and it is much easier when the paint doesn't dry instantaneously. Which may be why I realised what I hadn't realised before - it is very easy to get too much paint on a Gelli plate, but impossible to get too little. Even if all you have is a few smears left over from a previous print, a spritz of water will often give you a second print, which can be more interesting than the first!

The next step in mark making will probably involve the Embellisher - watch this space.