The little guys had the week off school, so that although we had a day off grandparent duty on Monday, on Thursday we looked after them all day - exhausting, but fun. Babybel (who is definitely not a little thing any more, she is growing like a sunflower) had a hospital appointment in the morning, which precluded any long trips. (Not a serious problem, just what in my day was called a lazy eye, which has improved enormously.) Given that we had Monday off, I don't have much to show you - a bit of knitting and three books of the week. That may sound impressive, but two of them are very simple - we realised on Thursday that paper and pencils would fill in the time spent waiting for daddy, so granny has found a small pencil case and made two little pamphlets, all to be kept in the car for future use. The other book was a bit more complicated. Earlier in the week I came across a few A5 sheets of hand made paper I don't remember buying, and decided to use them for a book.

I didn't want to fold the paper, so decided on a stab binding. I vaguely remembered seeing instructions for such a binding with a fold over cover, but couldn't find them in my numerous books. I finally found them in Shereen La Plantz's 'Cover to Cover', found and cut some suitable card for the cover, punched the 72 holes required, selected some unsuitable fibre for the binding, tracked down a needle with an eye big enough to take the unsuitable fibre, (not easy) and sewed up the book.

It doesn't look much from the outside, but the unsuitable fibre looks OK when you open the cover. 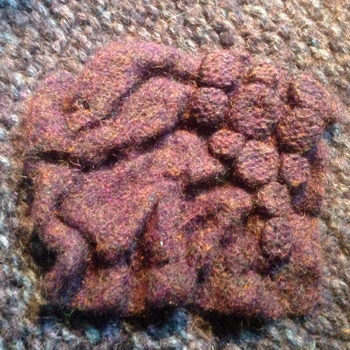 Odd bits of knitting have also taken place. In some cases very odd, like this experiment in felted shibori, which is about to get some beads. (Yes, I know what it looks like.) 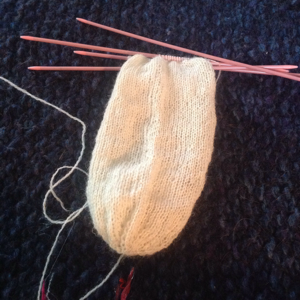 I won't tell you what Wensleydale said this looked like, but I pointed out to him that:

a) it is far too big and

b) it would not be fit for purpose because of the holes.

In theory it is another 2ply vessel, but longer and destined for more determined felting. 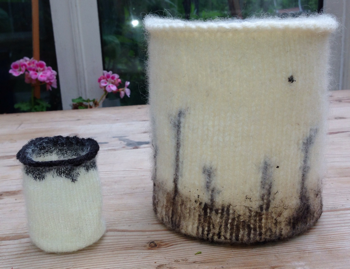 And finally, I decided the previously knit vessels need a bit of colour. The little one was dipped in Quink, the bigger one in something called Prout's Ink, another forgotten purchase, which managed to be both very glutinous and very drippy at the same time. And it smells like the brown shibori looks. Not recommended, even though I like the result.

I nearly forgot. One thing this week was 'really big', as the VHC would say. Winchester Discovery Centre is showing Grayson Perry's 'Walthamstow Tapestry', so we pottered out to see it. Very impressive - it fills the entire wall of the gallery. I especially loved the colour, the patterns, and the birds and flowers, apparently inspired by batiks. And the 'birth' and 'death' sections involve quilts - there's a man who knows his textiles.

Oh I love the dipped into ink bit!
Sandy