I thought it was only a couple of weeks...

since I last posted, but it looks like it's nearly three. I have a bit of an excuse - it was Babybel's birthday, and she had her party on Sunday, so we had to be there. Facebook found a photo I posted 8 years ago of a very new, very tiny dark haired scrap with tubes in her hand [she and her mum had a rough time of it). She's still got lovely hair, although it's not quite as dark, but as she's grown and I've shrunk, she's nearly up to my shoulders now. (We won't talk about how much older I look...)

Knitting has continued. Glove number 2, the 3 metre\2 kilo glove is finished, even down to the 'repairs'. 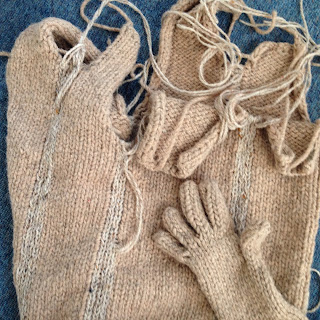 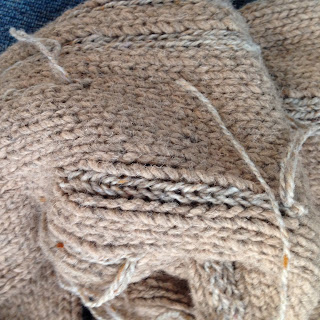 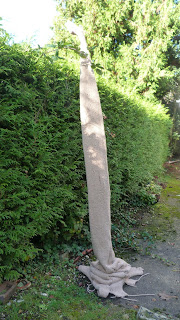 The only problem is that the cane and chunk of wood system I invented to hold the others up just doesn't work for this one.  The cane bends and the glove falls over - which it is why it is leaning on the hedge, peering at the neighbours.

However, in my last tutorial, I was asked why I didn't want to hang them up - and, although I once had a reason, I couldn't remember what it was... So my current thinking is to have some standing up, and some hanging down. It was suggested that they had something 'to represent what's inside them' underneath. which is puzzling me a bit, I have to admit. As is how to hang a 3 metre glove from 2.5 metre walls.

I have also finished number 3, a little smaller at 2.6 metres but no lighter. Tomorrow I hope to experiment with a leftover of copper piping, which hopefully will not bend, and possibly two lumps of wood glued together, to see if those will hold them up. 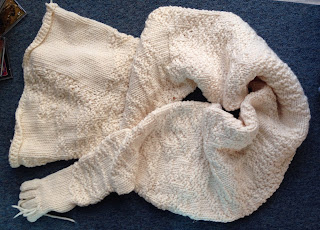 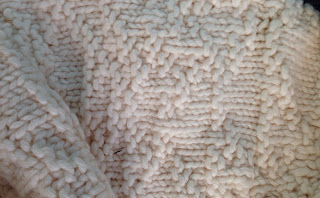 The tutor, who was a little judgemental about my support system, suggested I tried expanding foam. Which could be - er - interesting. I've bought a small can of the stuff you use to fill holes in walls ( I think he meant cavity wall insulation), and I'm waiting for a suitable day to go out in the garden in my hazmat gear and experiment. If it ever stops raining or blowing a gale. I've also been looking at bean bag filling, but only for the smaller ones.

I have started a fourth glove, which I neglected to photograph before it got too dark, so I am on track for five by Christmas, which was my aim. However another of the tutor's comments as that the gloves were a little formulaic (he is a master of tact). I explained the time pressures (he's not a knitter), so he suggested I put something in the sketch book to show that I had had other ideas. 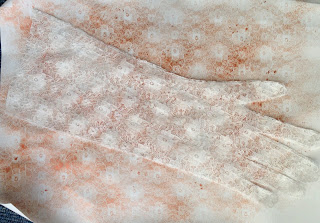 So here it is. (There are a few more, but they haven't had their photos taken yet). After my misguided attempt to sew a glove properly, in the summer, I thought about making some without bothering about the bits which go on the insides of the fingers and which drove the glove maker to tears. It means the glove is unwearable, but when did that ever stop me?

In case it isn't clear, this is a white polyester lace glove on a sheet of paper I sprayed with ink through another piece of lace - because white on white is a little difficult to see. I have plans to set fire to the glove - you know how I like setting fire to things...

I wasn't too sorry to be told to do something a bit different, as I found the two big gloves hard work, and decided my hands needed a rest. The fabric gloves are machine sewn, but I've been doing some hand embroidery too. Impulsively, I mail ordered Claire Wellesley-Smith's book 'Slow Stitch'  because I liked the cover, and the concept. The sections on the underlying philosophy and on natural dyeing are not my cup of tea, but the emphasis on minimalist stitching, and the examples of other's work are very inspiring. So much so that I have started a stitch journal.

Hands, of course, wonky, of course, and fabric and threads from the stash, of course: making a dent in that is part of the point. Not sure what this fabric is, but once I'd got started it reminded me of the Bayeux Tapestry, and I decided to add columns, and borders of phrases about hands.

I had intended to start with a few variations of running stitch and then move on, but I made the mistake of looking at Constance Howard's Book of Stitches (and I didn't pay  anywhere near that much for my copy!).  She includes 7 pages of photographs of variations of running stitch, all inspiring, and refers the reader to Jaqueline Enthoven's 'Stitches of Creative Embroidery', which I just happen to own as well, and where there are several more.  I think I'll be doing running stitch for a while yet. 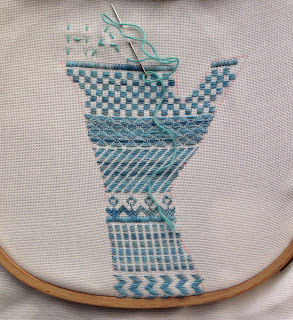 This is the second section ( pattern darning and Holbein stitch) which will be joined on the first when it's finished. Probably with running stitches.