It felt like a busy week - (as long as a three volume novel.)

Although in fact it was probably more stressful than busy. In the early part of the week I was focused on preparing for Wednesday. Wednesdays are usually one of my most relaxing Uni days - arrive in time for breakfast at Costa, go to an interesting lecture, have lunch and a gossip with fellow students, and come home (albeit usually in the rain). But this week was interim crits...

Last year I coasted through them - 'I'm new around here, it's a year till my degree show, I'm still finding my feet'. But now it's 'This better be right because I've only got till April and if I'm completely on the wrong track I'm b******d.' (Let me make clear that I've had lots of helpful tutorial input so I was pretty sure I was OK, but that didn't stop the nerves.)

So I spent the weekend, and Monday and Tuesday, working out how to support the 3 gloves I've finished, adding some experimental stuff, bringing the paperwork up to date, knitting and worrying.

Wensleydale came with me and I'm very glad he did. Neither of us is good at climbing any more, but he is marginally better than me, so he hung big brown glove from a batten, while I shuffled big and medium white gloves around on their ramshackle armatures.

Note folds of big brown on the floor. There's at least another metre there. The red mark is on the wall, not the glove.

Despite all my anxieties, on the whole it was a good experience. I was encouraged by a positive reaction from a very senior member of staff who happened to be passing as I struggled to remove 2.5 metres+ of big white glove, plus armature, from the back of the car, before the crits even began. The crits themselves were also positive, with some helpful suggestions, like draping one or two of the 'resolved samples' I made over the summer on the floor. Which means I have 5 finished gloves, not 3. I can keep calm and carry on knitting

One of my ongoing concerns has been how to support the gloves, especially the big ones. Some tutors have suggested hanging them up - hence my efforts to do so - but another saw it as clichéd. Our experience on Wednesday was that it was >*^~>>~ difficult. If I can't hang them, they'll have to stand up.

But the armatures I've used for the smaller ones just aren't strong enough to support the bigger ones, and hints have dropped that they are not professional enough either. So I did what I should have done earlier, and consulted the engineers in the family. As the older engineer and I were both insomniac on Wednesday night, by dawn we had worked out a possible solution, which we will try out after Christmas. The wonders of the Internet, solving (I hope) engineering problems in your PJs.

On Friday I had a break from knitting, and went down to Walford for a course on Gelli plate printing with Alison Board, which was excellent - I learned loads, and will be a much more confident Gellier in future. But she kept us working, and I came home exhausted. 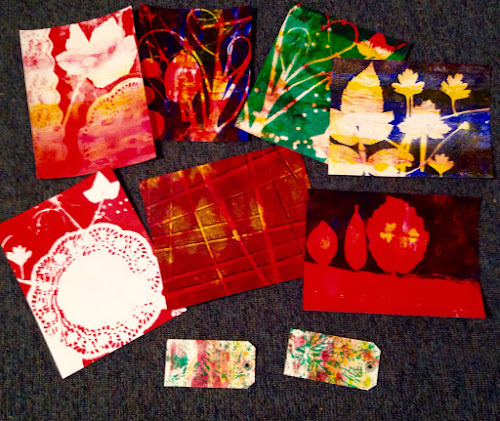 After all that we were aiming to have a quiet weekend, which I achieved, although W. had to go out to an emergency water-appearing-on-the-floor situation at the little guys' house, which fortunately seems not to be too serious. So I stayed at home and:

2. Worked on my stitch journal. I don't get round to this every day, and it is slow stitching after all, so I'm in no rush. It's a nice break when my hands have done enough knitting. The fabric is a piece of random patchwork I made a while ago for a purpose I have since forgotten...

I've come to the conclusion that the stitch(es) is not running stitch but straight stitch in some of its many incarnations. 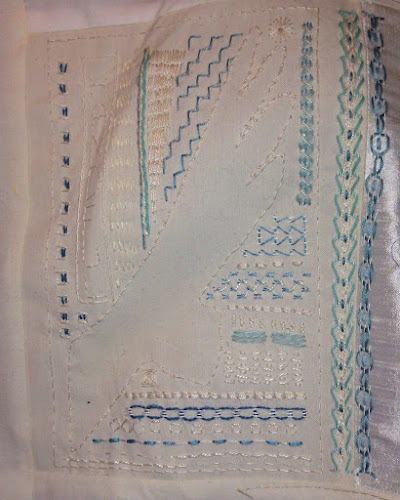 3. Made another junk mail handbook. Only two this week, which suggests we don't get as much junk mail as I thought we did. 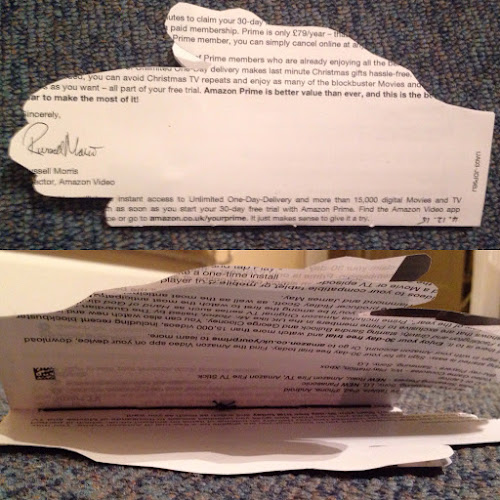 4. Made 1 more decoration for the Advent Bough. Well, 5, actually. We only needed 1, but when we brought the bough in, I thought that some of the decorations I'd already made might be too big, and as I came across these instructions for mass production, I made a few more. 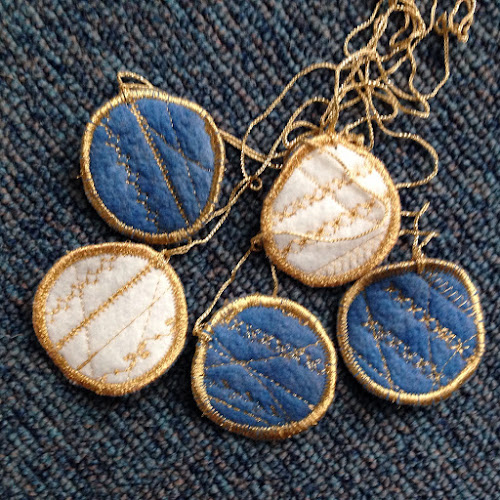 The bough is looking good, although there has been some mind changing about it. When we first put it up, I felt it needed lights, so when we were down at B&Q buying wood from which to suspend gloves, we also bought a small string of battery powered lights. The lights looked white - until we turned them on, when they looked blue and yellow. And too big. 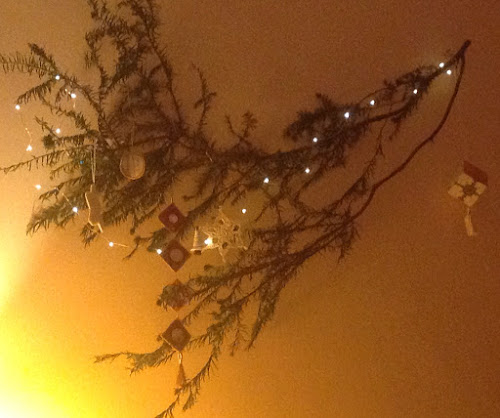 So I click and collected some smaller whiter ones from M&S, which are perfect - except there aren't enough of them. So I've clicked some more and will collect them tomorrow. The annoying thing is that M&S are doing a 3 for 2 offer, so if we'd ordered both of them at the same time...

According to the calendar, nest week is quieter. We shall see.