Nostalgia isn't what it used to be. 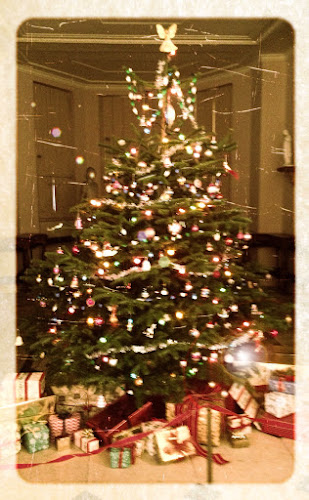 The vintage Christmas photos I've been posting are of the Christmas decorations at The Vyne. The first one was 50‘s inspired, so of course Wensleydale and I spent more time looking at that one than any of the others.

There were a lot of things we remembered. All the ornaments looked like they were made of glass, as ours were. This meant that. inevitably, when you unpacked your decorations in December, there had been some breakages. My mother had a set of bead-like baubles on a string, which got shorter and shorter over the years. There were still a few left when I inherited my parents' decorations, but I think W. quietly disposed of the tattered and chipped remains.

The Vyne didn't have such a string, but had others we recognised - long ogees, spheres with indentations on one side, birds with tails made (I think), of nylon.

But - The Vyne's was a large, real tree. Our tree was a small, tatty artificial one which reappeared year after year throughout my childhood. And we had real candles, held in things like metal pegs, with a socket for the candles. These were only lit by adults, watched carefully while burning and extinguished quickly. There was great emphasis on how dangerous they were. They vanished much earlier than the tree

We did have electric lights as well - not a lot of white ones like The Vyne's, but a few coloured ones shaped like elongated pears. Before these were hung on the tree, there was the great pre-Christmas ceremony of checking the lights, conducted methodically by my father. (He was like that.)

The lights wouldn't work if a lightbulb was loose, so the first remedy was to check that every one was screwed in tight. This never worked.

Another cause of non-functional lights, because of the way old fashioned lights were wired, was a dud bulb. One out, all out. The remedy for this was to get a spare bulb, and replace each bulb in turn to try to find the dud one. Even though there were only 12 lights, this took time. My recollection was that it usually worked, but with hindsight, I wonder what happened if two or more bulbs were dud, or your test bulb was. I certainly remember emergency trips out to buy more bulbs, and that dad replaced the set as soon as lights wired in parallel became available - although we still needed spare bulbs.

So, The Vyne's 50s Christmas wasn't quite like mine - but then a Tudor mansion in Hampshire doesn't bear much resemblance to a 2.5 bedroom semi in the north of England, so there were bound to a few differences...