Reading blogs can be bad for you. It can lead to addiction...

For example, I regularly read Liz Plummer's blog. Recently she posted about her addiction to notebooks, and paper and such. OK, I already had that, can't blame her for that.

Then she mentioned something called 'Midori notebooks', and how she made one from some painted Vilene she happened to have lying around.

Well, I didn't have any painted Vilene, but I did have some painted Lutradur I'd been thinking of throwing out.

If you are also addicted to all things stationery, and like making books, take my advice. Don't, whatever you do, do what I did. Do not, do not Google 'Midori notebooks'.

I realise that I am several years behind the times here, and the journalling/scrapping world, who seem to be the biggest fans of Midoris, may have moved on to different ways of doing whatever it is that they do. But if, like me, this is new to you, a Midori is not really a notebook, but a cover for several notebooks joined together. The idea is that you have different notebooks for different things, and when you have filled one you can take it out and replace it. And if you don't want to shell out £40 for a nice bit of Japanese leather and some elastic, you can make your own 'fauxdori', and the notebooks, pockets etc. to go in it. There are dozens, if not hundreds of videos on YouTube (I know. I've watched most of them) showing you how to make them out of all sorts of materials from place mats to solid gold - well, maybe I exaggerate slightly. This is a good one. (A pusher? Me?)

So I made one. Well, to be truthful, I made three four. 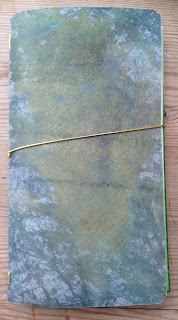 No. 1. I FuseFX'd the two aforementioned pieces of Lutradur together to make them stiff enough, then just punched holes in the suggested places, threaded through some elastic, and bob's your uncle. Except that of course I had to make some booklets to go in it, and because I'd trimmed the Lutradur to straighten it up, it had ended up not quite A4, so I had to cut down the paper to fit. That took much longer than making the cover.

However, it fits nicely in the pocket of my big bag, and I can get my odd shaped diary into it, plus my cheque book, as I'm one of those odd people who still carries one. 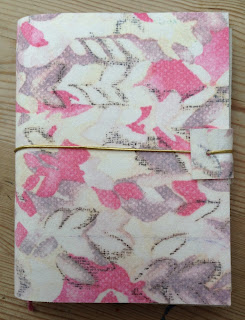 No. 2. is a sandwich of transfer printed Lutradur and Evolon, and really it's a bit too floppy, so I added a stiff card pocket as the first layer next to the cover. To save time, I made it to fit two Cath Kidston notebooks I already had, and measured their depth as well as height and width. The thingy on the elastic was a tip from a video - it's designed to protect the edges of the cover, as they are soft. 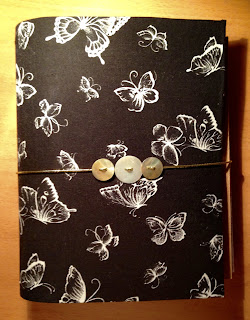 No.3. is my favourite. The cover is scrap fabric bonded to craft Vilene (something to use up my leftover Vilene!) It is A4 notebook size, although I still ended up making some notebooks for it - to use up paper!

I love how fat this is - I always like my scrapbooks when they are so full they won't close properly, and this is getting on that way. Plus I like the buttons on the elastic, and on the end of the bookmark, which you can't see. No idea what I'm going to use it for, but... 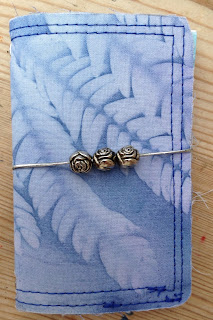 No.4. is the baby. I really needed a notebook for the handbag I carry when I can get away with not carrying the big one, and this just fits the pocket in that bag. It is a scrap of sunprinted cotton, again bonded on to Vilene, but stitched as well as it will get lots of wear.