Creative Textiles - and some good news

Although I haven't mentioned the Creative Textiles workshop for a while, I haven't forgotten about it. I have been working on some ideas, although I don't think I will return to the long piece I started in the workshop - the quilt has confirmed my preference for small pieces!
The work we did on modifying marks got me thinking about similarity and difference, and I developed an idea for some pieces on that theme using buttons rather than marks. [Having inherited three women's stashes as well as my own I have a lot of buttons.] Buttons have functional features in common - e.g. holes - but can vary in a number of ways - size, shape, colour, number and position holes etc. - similarities and differences.
But as buttons are usually relatively simple in design I decided they would need some interesting backgrounds. I experimented with making stiff backgrounds because I am bored with using craft Vilene for book covers. [You had realised books were involved, hadn't you?]
So I glued bits of a variety of papers on decorators' lining paper, cartridge paper and calico. Then I sloshed on white emulsion paint [my occasional substitute for gesso] and, while they were still wet, painted them with Brusho. I used grey, black and blue Brusho, although the grey is quite blue and was bluer still by the time I'd finished ... Then they got a spritz of moonshadow mist and the calico was dry brushed with black paint - just because I happened to have some that needed using up. [I am mean about paint and don't like washing it down the drain.]

Unfortunately, when it was dry, I realised that it just wouldn't work with the buttons. Time for Plan B - which according to Wensleydale is 'thinking up Plan C,]. Back to mark making.

At the time, I didn't want to use any of the ideas for marks the workshop had generated. [I have had some ideas since then, which may appear later.] So I decided to stamp it instead. If you are not a perfectionist stamper, each repeat of the stamp is different, which I like. The dark blue tones, the conjunction of the moon with Venus and Mercury [I think?] and my new book ['Symbols of the Goddess' by Clare Gibson] - all suggested planet imagery. I stamped various circles and arcs with found objects - and this is the stage I've reached. Now for some embroidery ...
Still need to think about what I'm going to do with all those buttons though.
And the good news? 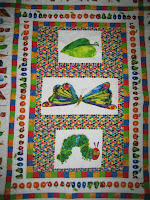 This is finished. Quilted, bound, washed and ready to be wrestled into some wrapping paper. I would like to show you the beautiful free motion quilted butterflies I covered it with. I would like to show them to you but unfortunately my quilting skills aren't up to that and it is all straight lines - a diagonal grid in the centre and lines round the borders. I can FME small pieces - but not this, which seemed to grow by the minute. It is, however, a good size for snuggling on the sofa under, as Wensleydale found when I was finishing the binding. I just hope the recipient likes it.

Since then, someone on the British Quilt List has asked about 'In the Night Garden' quilts - and I had already realised that if the hungry Caterpillar is successful someone might produce 'Wild Things' fabric [Babybel's daddy's favourite book.] However, a girl can have too many quilts.