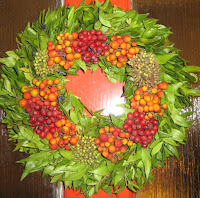 was to this. Unfortunately I forgot my camera so I can't show you any photos. I can show you what I bought - this wreath, which is our only concession so far to Christmas ['Bah! Humbug!'] 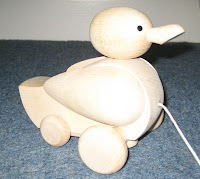 and this Czech duck. When you pull him along he moves his head and quacks. I know he's Czech because he has something written on his tummy which Google tells me means 'Unsuitable for Children under 3 years' in Czech. Pity I didn't spot that before I bought him - now he will have to go into hibernation for 2 years or only be played with under supervision.

We went with Mr and Mrs Cheddar and at their suggestion went down to the market just as dusk was falling and the lights were coming on. We have only been in day time in previous years and it was definitely better to go in the late afternoon. It seemed quite quiet too - but it was very very very cold! 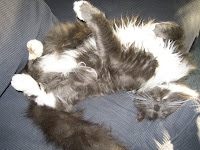 Incidentally, the reason I forgot my camera was because I took it out of my bag to take this photo of some sofa testing and forgot to put it back. She's not dead - just asleep. It was very difficult to take a photo which didn't make her look as though she had no head.

Today has been much more industrious - I have quilted and bound the caterpillar quilt, apart from hand stitching down the binding which will be a pleasant task for TV listening. [Photo of that when I have finished.] I also made this with the left overs from the quilt. Babies need bags for all their stuff!