Life's a beach - but sometimes insomnia can be quite productive.

It was one of those sleepless nights, and as I lay listening to Wensleydale's gentle snores I began thinking about the daily photo. What is the point? I load up the photo, make a few vague comments about it, probably bore the pants off you all - and forget about it.
I was also aware that I haven't done anything in my sketchbook this year - not even stick in a few postcards. So I decided to modify the daily photo process a bit - show you a photo and then explore some design ideas from it, and post some images over the next few days. This may do nothing for you, gentle reader, but should encourage me to play around with design. [I need to get into my head that exploring design ideas can be an end in itself and doesn't have to lead to an actual embroidery.]
So here is the first photo of the new regime - although I don't promise to do this all the time.

This is another photo I took on the beach at Towyn. I was preparing for the C&G Part 1 wall hanging, which had to include manipulated fabric - so I was looking at texture. Hence this exciting photo of pebbles. 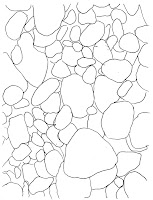 My first idea was to trace the pebble outlines.

When I looked at the tracing I realised that the smaller pebbles are concentrated in the centre of the the image, something I hadn't noticed in the photo. I haven't really thought about how I might use that in an embroidery, and as I have said before I need to get away from the idea that I must use the whole image - but I do like the diagonal movement I can now see. Comments / suggestions gratefully
accepte

I also traced a group of pebbles. I have several ideas about this which I am working on today - and hope to post about tomorrow.