Well – strictly speaking – they are finished. The most onerous part being the C*******s shopping. I went to the butcher’s this morning – ferried a few hundred yards by Cheese Major in his Chelsea tractor as I can’t ice-skate – and the box of organic veg arrived late this afternoon. Wensleydale is mulling the wine, and anything we haven’t got now we can live without.

And I finished that little book of samples from Kim Thittichai’s workshop, that I was going to whip up in a couple of afternoons. Trouble is I kept having ideas. 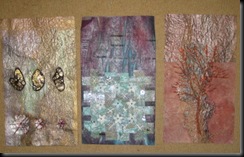 These are the last finishing touches. You may spot some distressed Tyvek on the left. I did it, so it’s in there – doesn’t mean I’ve changed my mind about the stuff!

The distressed Lutradur – which I do like – has gained a tree. It started as a stencil from Ed Roth’s ‘Stencil 101’, but the paint alone looked a bit lost so I added some copper FME. It still looks a bit lost in the photo, but it looks better in real life. 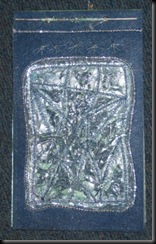 So that’s it. Tomorrow, when not cooking [for historic reasons, which no longer apply, we have Christmas dinner on Christmas Eve] I shall start thinking about my ideas from the great collage experiment last week.

JP made some kind comments about yesterday’s post – but I am worried that I have misled you, JP. The sketchbook pages I’m showing are all from my old City and Guilds course, not recent work. The sample book above is recent – the workshop which inspired it was part of the Foundation Degree I’m doing at Eastleigh College in Hampshire. Several of the pieces in it were made in that workshop – I made the book to hold the samples, but it sort of grew a bit …

And when I wrote about ‘slobbing in bed like a retired person’ – I was talking about myself. I’m very good at not getting up. I'm sure all other retired people are like my neighbour, who goes swimming before most people are at work.

The snow dyeing has been rinsed, washed and is drying as I type. It is looking good – apart from the felt. Either viscose/wool felt doesn’t dye with Procion dye like I thought it did – or it isn’t viscose/wool felt. Pity – it looked quite interesting before I washed it …

I have some other white felt I could try – but unfortunately the snow is rapidly disappearing, as we are having a thunder storm. This is, to put it mildly, unusual in the UK in December – but it’s the second one in as many weeks. And as W. has just said, we can’t remember ever having a thunder storm while there was snow on the ground. Now it’s hailing as well.

Another spread from my old C&G sketchbook. Having got the Green Man out of my system I moved on to trees – inspired by Mondrian.

You may not associate Mondrian with trees, but he made some beautiful – and increasingly abstract – images of them. There are a couple here. These are credit card and pencil rubber printed, based on our apple trees.