More experiments – and a rant.

In the mad scientist’s lab, I tried ironing the foil packaging from a packet of teabags, and as promised, it crinkled up nicely.

Unfortunately I forgot to take a photo before 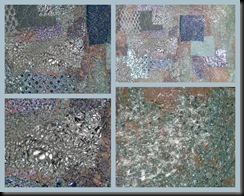 tearing it up and sewing it down – but you can see it here, bottom left. The sea foam effect on the right is the ironed cellophane.  The rest of the page is made up of some scraps of glitzy fabrics which have been sitting in a drawer while I decided what to do with them, all stuck down on crumpled brown paper [from the over packaged Boots order] with painted Bondaweb. Then the whole thing was FME’d - badly. 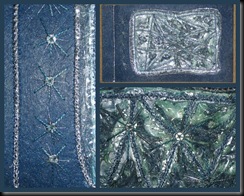 ‘Page’ because it is going in this book of samples. The cover may not look much different from the last time I showed it, but shiny things are difficult to photograph with flash. I’ve added some not quite eyelets through beads, and then, because they didn’t really stand out on the Tyvek sandwich, some silver bugles - which seem to have disappeared into the general bling. Then I sprayed the lot with Moon Shadow Mists. The Vilene drank it thirstily but there is a faint sparkle.

All of this, and some other bits I haven’t finished yet, have led to some pondering on this sort of work – and the conclusion that I don’t really like it – not just the result, the process. Ironed tea packet foil is fun – but what do you do with it?

I think I mentioned that Kim Thittichai said that she felt embroiderers collect techniques, but don’t really do anything with them. I think the question is – what can you do with them?

We seem to have reached a stage where techniques – melting things, burning things, coating fabric with gesso or glueing paper to it, whatever – is more important than the stitch. Stitch has become something you add as an afterthought or to blend in the burnt, melted, glued gessoed fabric. Which is why we find ourselves using only a limited range of stitches – FME, seeding, French knots, couching, Cretan or herringbone, if we are feeling really adventurous. Because there is no room on the b****y thing for anything more elaborate, even if you can get a needle though it.

But I like stitch. I like raised chain band and buttonhole, stem and back, feather and fly. I like pulled work and drawn thread work. I like all the varieties you can use in canvas work. I may moan about it but I even like cross stitch when it is liberated from Aida and twee designs.

Bring back stitch! Bring back traditional materials like canvas and cotton and silk – especially silk. And velvet.

I may make an exception for some techniques – like the one this lot of design work led to, by a rather circuitous path. This is the other side of the sketchbook page I showed yesterday, with the acetate flipped round against a different background.

so is 'technique mania' something genetic afflicting embroiderers, do you suppose, or is it actually inherent and/or a byproduct of the C&G type syllabus? I've only got to Module 2 of Part 2 and already my heart sinks at the prospect of paste papers and inside out tomato tubes. But possibly I am just unimaginative?