Note to the weatherman … 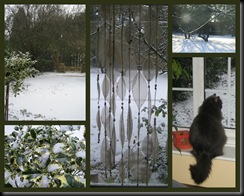 Christmas is next week.  Someone was not amused.

I stayed in and experimented – after I’d iced the Christmas cake.

According to Kim Thittichai, some packaging foils do interesting things if you iron them.

So I ironed some foils. I tried:

According to Kim, tea packet lining [must keep it the next time we start a new box], crisp packets and Magnum wrappers [don’t eat either] all work. 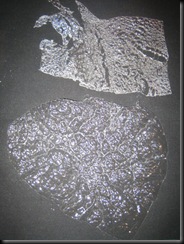 While I was at it I tried some cellophane – the brightly coloured stuff I got somewhere else didn’t work, the stuff I got from Kim did.  I see a pattern emerging here…

This is clear cellophane – which you can’t see through the baking parchment when you are ironing it, so if you are not careful it nearly disappears – like the top bit.

When you try hard to keep an eye on it, it doesn’t seem quite as interesting – bottled out too soon, maybe?

Then I made a sandwich – painted Tyvek, cellophane, po 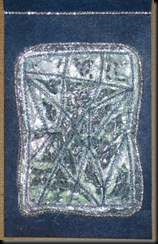 lyester organza, and more Tyvek. And lots and lots and lots of FME, with a lovely looking Indian metallic thread which was evil. And ironed it. And foiled it.And then attached it  to a piece of coloured Vilene, also from Kim.

Mmm – I’m increasingly underwhelmed. The cellophane just went into holes, the organza nearly disappeared, it’s too turquoise-and-silver and I’m not sure how to knock it back. Apart from copious quantities of emulsion paint.

I shall leave it for a while and try some hand stitch. It is intended to be a cover for a book of samples from Kim's class so 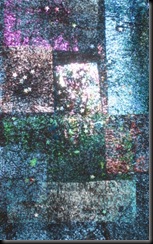 I shall recite the mantra ‘it’s only a sample’.

While I had the foil out I went for the full bling effect a la Kim. She showed us  a sample on which she had used the leftovers from sheets of iron-on foil. This is the Pelmet Vilene Plus she sells – the Plus being a coat of heat-activated glue on one side of very stiff Vilene. It was already coloured with Procion when she gave  it to us, I just added the foil – and the stars. 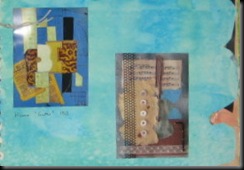 This is a little more restrained. It continues the C&G theme of making your own background ‘fabric’. In this case it is hand made paper – backed with iron-on interfacing, as otherwise it fell apart when I stitched it. And with a few extras. The image on the left is the Picasso collage which inspired my piece - and the squiggles on the right  are where I cut the edge of the page away.