Sorry to disappear without trace, but it turned out that what I thought was post-portfolio-preparation lethargy was actually the precursor of a stomach bug. You don't want to know the details – let’s just say that over the last few days I've done a lot more sleeping than usual, and 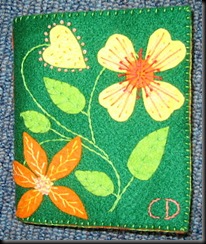 So all I've achieved creatively is this notebook – and most of it was done on Saturday.

I did drag myself into college today because I though it was hand-in day for the presentation write-up. Turns out it’s next week. Trust me to be over prepared.

We were given written details of Module 4 – but probably because I was feeling off colour I whinged because I think being given the written details isn’t enough, they need to be discussed. No-one else seemed to want to back me, although lots of people have said the same thing to me privately – but I always used to tell my students to speak up if they didn’t understand, because they would be speaking for lots of others, so loud mouth ploughed on – and won a promise to go through it in more detail later. I think the staff are so terrified of being directive they leave everything open – but as they do actually know what they want it would be better if they told us … [E.g, no pinked samples.]

Don’t normally wash dirty linen in public. I am really enjoying the course  - we have a stitched piece to make now, entitled ‘The Everyday’, which is interesting – but it would be more enjoyable if had more idea of what I was supposed to be doing!

I sooo empathise! - Ialways have seemed to be the one that says when I don't understand or can't do something and need some more explanation and then afterwards everyone else admits that didn' t follow either!!!!!!!