It was the first class …

of this term yesterday. I thought that everyone else would be miles ahead of me, as I’d lost so much time over Easter.

Turned out I needn’t have worried – and as someone quite rightly pointed out, I'd started a lot of stitch samples because that was all I felt up to. [Notice I said started, not finished ...]

The session was ‘independent working’ + tutorials, and as I’d bagged first place for a tutorial the last time, I volunteered to go last this time. I wasn’t sure what I was going to do in the interim, but it turned out to be very  useful to have 3 hours or so when I couldn’t do 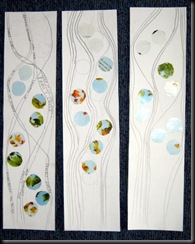 anything else. [Apart from drink coffee, look at other people’s ideas, gossip, and eat lunch – although I did manage to resist the chocolate machine …]

I started by pootling around with some design options. I  decided the best was the one on the left, only with a space at the bottom, lines that didn’t overlap, and more of the empty circles – what I call ‘ghost circles’.

So if you can imagine it with those changes, a blue background and blue and cream circles and lines, you’ll get the picture.

Then I finished some of the stitch samples, including trying out colours other than blue and cream. Not a good idea. 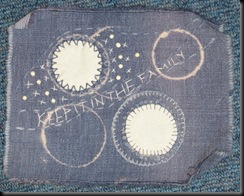 This is my favourite – heavily influenced by 50s embroidery and the Needlework Development Scheme.  [I can justify this – after the tutorial I can justify almost everything about  this design!]

But there is writing on the sample above. so that is my contribution to hand written blogging.

Back to the plot.

After all my designing and stitching, I had clarified my ideas, so the tutorial was really a matter of confirming [and justifying] them – although I did get a few suggestions about how to add the bits and bobs of textiles from the family. Some nice things were said about the sample above and the work book - one advantage of having done C&G Creative Sketchbooks is that although I can’t draw, I can glue, or splash paint, ink and bleach around a book, and hope something emerges …

So I came away feeling quite motivated.

On the way home I visited Cheese Major and his partner, Ali - who has got herself into the Hampshire team, well done that woman! 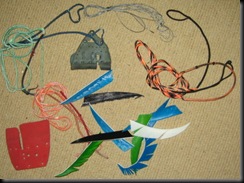 ‘Hampshire team for what?’ I hear you ask. Well, here's a clue – some of their contributions for the 2D piece. And if you can’t work out what that lot are for, here’s another clue. No, it’s not cricket.

At the moment I'm thinking of using some of the little bit of blue leather, which I think is a finger guard, and the blue bow string end I've bent into a heart shape, if that’s not too naff – but the feathers have a certain appeal, too.

After all yesterday’s excitement, this morning I made a full scale mock up, [C&G indoctrination] with some painted brown paper I prepared earlier.

Mmm – not a total success – but I did learn from the experience:

however, it has given me a better idea of what the piece might look like than the quarter scale sketches. I also tore the fabric 5 cms narrower because that was equivalent to 2 widths of the roller I put the bleach on with, rather than 2.5.

The bleached fabric has been rinsed, neutralised and washed and is currently drying – it’s looking good but I’ll have another look at it tomorrow and decide if it really is what I want. Otherwise I'll do another one – after all I still have 2.5 curtains to go …

This is personal experience teacher moan to follow, you may ignore if you wish!
But... can anyone explain why, after several weeks (if not at least 2 months) of my saying and writing on the board that samples for the skirt/trouser unit needed to be completed for the 19th April and I needed to see them before they start on the actual garment and design, that NO ONE realised they had to do this?

I know I also asked for a fully finished drafting unit for the 26th April and talked them through it on the last day before break, but still... How else DO you get deadlines across to students?

It doesn't help that I was overkeen when I did my C+G and competed with myself to get things done on time.
Thanks for listening, we now return to the regularly scheduled programme. LOL
Sandy

Thank you for your contribution!
The writing post was a lot of fun and quite a number of them were a bit embarrassed about their writing.
You have no need to worry its perfectly legible when stitched.