What to do on a sunny Bank Holiday? 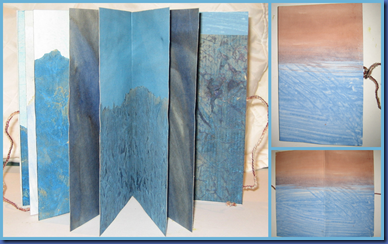 This one was completely unplanned. I'd seen a photo of a book with a photo of the sea on the cover, and when I came across this sea and sunset paper while looking for something else, I decided to use it as the cover of a little pamphlet stitched notebook. [It was going to be sand and sky but I put the cover on upside down.]

The paper was rather thin, so I went looking for something to back it with – and came across several pieces of sea-ish paper – I think I painted them when I was making a sea-themed hanging for C&G, but never used them.

Now it was going to be a pamphlet with sea coloured pages – but I realised that it would be better as a drum leaf binding – full spreads and no stitch.

Of course drum leaf takes a tad longer than quick and dirty pamphlet binding – but the result is much better.

This was an impulse too. During another insomniac night [shouldn’t complain. it’s ages since I had one] I decided I needed to start using some of my images in my books, instead of scrap paper. So this morning when I came across this on Donna's great ‘Make a Book a Day’ blog, I was inspired to make my own version.

Can you spot the deliberate mistake?

I could pretend that I intended to rearrange the picture, in order to symbolise the disruption of nature by human intervention – but I’d be lying. And I think it would have been better if I’d grunged up the card a bit. And the perfect beads had holes too small to get the perfect threads through. But a 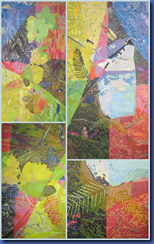 There is some embroidery on there – honest. I'm not quite sure why it’s there, or whether it actually adds anything – but it is definitely bright.

The next couple of print samples up for a bit of stitch definitely aren’t.