but this week became unexpectedly busy - and I'm still learning Mac, which has taken up blogging time.

We were unexpectedly called in to babysit on Monday and Tuesday, which was fun, but exhausting. Babybel is easy to look after, of course, but we are still learning about the Very Hungry Caterpillar. He has mastered crawling, commando style, so I thought I would be chasing him around - but no, he's mastered crawling, so now he's working on standing up, banging things and shouting. Once I'd realised that was all he wanted to do, plus take suitable food and sleep breaks - it was easy. However I suspect when he moves on to walking things will get a little more complicated.

Mac-mastering has consisted mostly of transferring my thousands of photos from the PC, and then culling them - which, with hindsight, is the wrong way round. With a little help from Cheese Major [who doesn't do Macs] I've got them all from one to t'other, and entirely off my own bat worked out how 'events' and 'albums' work. I think. 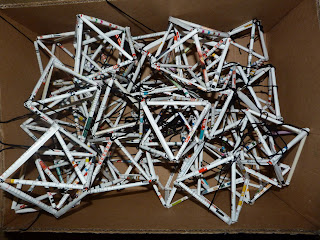 And I've even managed to do a bit of work.

This is 'Great Art?' - yet to be released into the wild. When I said I could make 50 of these out of the Great Art catalogue, of course I misspoke - 2 pages = 1 sheet of paper, so I overestimated slightly,  there are 25 of these bipyramids - or possibly dipyramids, I can't remember which it is.

As we've had some reasonable telly I've managed to get on with 'Untitled' as well. Each row of raised chain band takes an hour and 5 metres of thread, so it is slow going, and not very exciting, which is why it needs telly, or the cheerful chat of my fellow students, as an accompaniment. This one is definitely not going outside - apart from a brief trip for a photo. I can't think of a name for it - my usual naming policy has let me down, because 'Brown Paper' doesn't seem right - and for once Wensleydale has failed to come up with anything. A fellow student suggested 'Jubilee' but that suggests some enthusiasm for something I am agog with indifference about. So 'Untitled' it is, unless I have a flash of inspiration.

Spoke to Sue Chapman at fashion embroidery and stitch show today. Said I have been following your progress. she was quite pleased with how you were doing and gave me the dates for your exhibition.

I'd love to, but I will have to see as we have our EV coming around that time as well.
I'm off to bed.
Sandy