This was going to be the week…

that I got motivated. I thought the first week back at college was going to be a ‘self-directed activity’ session, so I planned to roll a lot of tubes and play around with some ideas.

Turned out it was a workshop session, working with paper – which was quite useful, but not the kick up the backside I really needed.

On Thursday I did manage to get these two samples made – both from an old phone book, one with added Quink and Brusho. I prefer the coloured one but  I’m not sure  that I can justify added colour artistically [Pretentious? Moi?]– but does that matter? Dunno.

I was going to do more on Friday, but we were called in for a spot of emergency babysitting, when norovirus hit the Cheese Minor household – and a some more on Saturday. Then, as I expected, norovirus hit Cheese Acres, and that was the weekend gone. I’ll spare you the details… 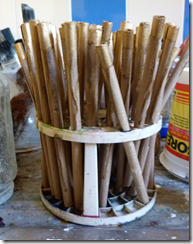 I have managed to do a bit more today, – dipping the ends of brown paper tubes in gold paint – but the smell of the paint hasn’t improved the after-effects of the virus. These are destined to be fastened together with some rather nice hand-dyed thread – for no very good reason except that I fancy doing it. Just hope it works…

I wanted to get several samples finished, because we have ‘peer review’ on Wednesday, and i thought it was a good opportunity to get some feedback on the things I feel a bit iffy about – like this.

I hope they’ll be gentle with me!