Finished, half finished and just begun.

Finished, just in time for the second meeting of 'Visual Marks' next week. The more stitch I added, the more soft and crumpled it became, but I like that feeling of wear and tear. 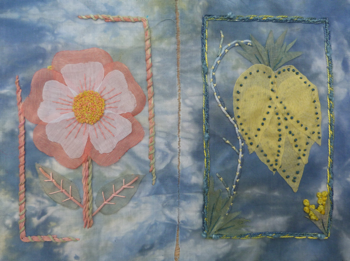 Half finished, because I intend to make four. I've soldered out lots of little organza circles to start the third one, a bunch of grapes, inspired by a photo in Margaret Swain's 'Needlework of Mary Queen of Scots'. A balance to the Tudor rose, perhaps.

And this is just begun. This what I decided to do with my little bit of hand spun. There isn't enough to cover the whole surface, but it makes an interesting contrast to the papier maché.

Good ideas on the vessels!
Sandy